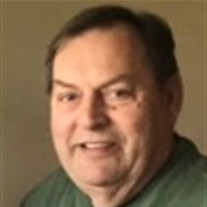 Allen Gene Pugliese of Macomb Township passed away from complications due to Covid on November 14, 2021. Allen was born on July 19, 1948, in Detroit, Michigan to the late John Pugliese and the late Dorothy Lang. He married Dyann Hill on February 14, 1969, and was her best friend, confidant, and devoted supporter. They enjoyed their place in Caseville especially morning coffee overlooking Saginaw Bay, watching sunsets, and sightseeing drives around The Thumb. Allen was a devoted father and is survived by his son Scott (Kimberly) Pugliese and his daughter Kelly (Mark) Bettinger. His grandson Hunter Pugliese was his buddy. Whether they were attending a Michigan Stars soccer game, watching John Wayne movies, or just hanging out, they had a grandpa-grandson relationship of laughter, teasing, and love. He will be missed by his brothers-in-law and sisters-in-law: Dennis Hill, Donna (Donald) Kachman, Doris (Philip) Neumeyer, David (Lisa) Hill, and Donald (Kate) Hill as well as his nephew Bobby Lang III and godsons Eddie Radulski and Don Kachman Jr. He is also survived by aunts and an uncle and by many nieces, nephews, great nieces, great nephews, cousins, friends, and neighbors. He was a “son” to Dyann’s father Paul Hill and enjoyed many breakfasts with him discussing politics and their military service experiences. Drafted in 1969, Allen served in the United States Army as a Military Policeman. He was assigned to a U.S. Marine Division in Da Nang, Viet Nam where he picked up and guarded prisoners of war. Allen was proud of having served his country and never failed to thank fellow veterans for their service. Allen founded the Tri-Community Soccer Association, a youth soccer league. He also founded the Michigan Premier Soccer League, an adult soccer league and served as President for eleven years. He coached youth and adult teams including the TCSA Travelers, Eisenhower High School girls’ varsity team in their off season, the Carpathia Kickers, the MPSL Michigan Celtic, and the MPSL Michigan Cobras. He was inducted into the Michigan Soccer Association’s Hall of Fame in 2008, Allen was an avid follower of Eisenhower High School’s football program. He worked for Utica Community Schools at Eisenhower in game management security, as a scorer for girls’ volleyball, and for the UCS annual Career Expo. After his retirement, Allen just was not happy sitting at home and went to work for HTC Tooling. He enjoyed his “retirement” job and his co-workers and customers. While he leaves behind many grieving family and friends, he has left a legacy of being a supportive husband; of pride in his children and grandson; of service to his country; and of love for his family and friends. Visitation will be at Wm. Sullivan Funeral Director at 8459 Hall Road Utica, MI 48317 on Thursday November 18th from 2 to 8pm and Friday November 19th from 2 to 8pm with a scripture service at 7pm. Funeral Mass for Allen will be held at St. Therese of Lisieux on Saturday November 20th in-state at 9:15am. The funeral mass will begin at 10am.

Allen Gene Pugliese of Macomb Township passed away from complications due to Covid on November 14, 2021. Allen was born on July 19, 1948, in Detroit, Michigan to the late John Pugliese and the late Dorothy Lang. He married Dyann Hill on February... View Obituary & Service Information

The family of Allen G. Pugliese created this Life Tributes page to make it easy to share your memories.

Allen Gene Pugliese of Macomb Township passed away from complications...

Send flowers to the Pugliese family.