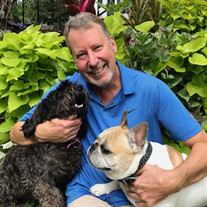 Andrew John Prakken was born in Detroit, Michigan. He passed away unexpectedly from heart complications on Thursday, July 22, 2021. Andy spent his youth in Bloomfield Township and most recently resided in Berkley, MI. He was so proud to have also lived in three different spots in Detroit long before it was cool to move downtown. Andy was ahead of every curve from business to music—his brilliance was unparalleled. He was a gifted musician and guitar savant from the time he was ten years old playing in innumerable bands throughout his lifetime and professionally trained with a college double major in both business as well as music. Andy worked with several well-known musical talents throughout his life and was the lead guitarist for the UPN TV 50 program U.V.D.O. back in the 90s. He most recently started a new band called the Madcappers, which played their first gig just over a week ago in Royal Oak. Andy was seen that night shredding his guitar during a solo to WHITE ROOM, by Derek and the Dominos as the audience rocked out. Andy’s business life was exemplary from the moment he stepped into the advertising and marketing arena almost forty years ago. He was always ahead of the curve whether it was running multiple teams across several media and analytics disciplines or just leading by example. He managed hundreds of people as he enjoyed an unbeaten career building marketing programs for some of the country’s top brands, such as Ford Motor company, Domino’s Pizza, Kohl’s, Bosch, and many others. His work has been published in Harvard Business School case studies, McGraw-Hill college marketing textbooks, The New York Times and The Wall Street Journal—not to mention he has won numerous industry awards as well. Andy was adored by his teams and was a well-respected leader in the business as EVP, Chief Media Officer at JWT /Team Detroit (Ford's Global Advertising Agency) and most recently as EVP, Chief Integration Officer at DP+. Andy was the adoring father to his two daughters who meant everything to him and what gave him the best purpose--Kaitlin Prakken (26) and Adriana Prakken (22). He was also deeply devoted to the love of his life, his forever partner, Lynn Pellerito as they kept each other often laughing and crying about all-things life presented. He was the greatest little brother to Jan (Bob) Serra, as well as the consummate opponent in ping pong, foosball and billiards to his two older brothers Mark and Larry Prakken. Andy is preceded in death by his parents Jack and Kathryn Prakken, as well as his sister Shauna Prakken. He was loved and cherished by his stepmother Sybil Prakken, in addition to his late stepbrother Ed Holton (Melany), stepsister Liana Holton (late Debbie Mortimer) and stepbrother Mark Holton (Sheryl). Andy was blessed with many incredible nieces, nephews and cousins. His immediate family and extended family were of incredible importance to him. Andy will be most remembered not only for his love of family and his deeply rooted friendships, but also for his great love of his dogs Mojo and Cheech. He also delighted in all travel—especially beaches, sunsets and the open water. While he often felt that Covid-19 brought much heartache to many, as well as kept him from seeing his girls and his stepmom Sybil for extended periods of time, he also found incredible blessings that he cherished, including nine weeks with Lynn working the whole time; dogs by his side and just steps away from the ocean in Florida. Andy also wanted men’s neck ties forever prohibited in all walks of life and deemed flip-flops as a mandatory part of our daily work uniform. Flip flops or sandals are requested to be worn at his funeral service this Friday. Public visitation will be Thursday, July 29th from 2p-8p, at Wm. Sullivan & Son Funeral Home, 705 W. 11 Mile Road, Royal Oak, MI 48067. Instate Friday, July 30th 10a-11a with services immediately following at Our Lady of La Salette Church, 2600 Harvard Road, Berkley, MI 48072 In lieu of flowers, please do something nice for someone. Andy would like that. Otherwise, donations could be made to one of his favorite places on the planet--The Detroit Zoo or to DIME Detroit (Detroit Institute of Music Education).

Andrew John Prakken was born in Detroit, Michigan. He passed away unexpectedly from heart complications on Thursday, July 22, 2021. Andy spent his youth in Bloomfield Township and most recently resided in Berkley, MI. He was so proud to have... View Obituary & Service Information

The family of Andy Prakken created this Life Tributes page to make it easy to share your memories.

Andrew John Prakken was born in Detroit, Michigan. He passed...