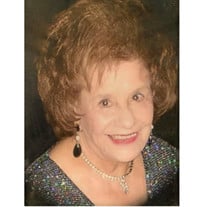 Antonia was called home to heaven on May 7, 2021. She was born on October 18, 1924 in Detroit, Michigan to Italian immigrant parents, Michele and Giovanna Isca. She was the first of her sisters, Marcella, Rose, and Margaret to graduate High School, Northeastern High class of 1942. From there she began working at General Motors in the Fisher Building until her marriage in October 1943. In later years, she resumed he career with GM at the Tech Center in Warren, for a total of 21 years of service. She remained active in the retirees club, organizing numerous functions. Antonia became a member at Trinity Lutheran after moving to Sterling Heights in 1995 and attended faithfully when her health permitted. She lead a very active lifestyle, traveling frequently with friends and family. Her interests included ballroom dancing, bowling, golf, and cooking! She loved entertaining, hosting many dinners for neighbors, friends, and holidays. In addition to her husband John, she was preceded in death by her son Richard (Debby). She leaves behind her son Gary and daughter Janet (Bill) Daniels, six grandchildren; John (Kristen) Leach, Raelene Parker, Andy (Alicia) Leach, Jody (Zaven) Altounian, Cory (Nicole) Leach and Kara (Matt) Powers and 12 great-grandchildren; Natalie Leach, Darien Parker, Ethan Leach, Daniel Leach, Adeline Leach, Stepan Altounian, Alex Altounian, Emineh Altounian, Owen Leach, Hailey Leach, Ella Powers and Nora Powers, and one great-great-grandchild; Violet Parker. A Memorial service will be held on Saturday, May 29, 2021 with paying of respects at 10:30 a.m., service begins at 11 a.m., at Trinity Lutheran Church, 45160 Van Dyke (NE corner of Hall Road/M59 and Van Dyke), Utica, Michigan 48317. Those desiring may make a contribution to the Make a Wish Foundation or Feeding America. Due to Covid concerns, socially distanced seating will be observed and masks are required. Please share a memory at www.SullivanFuneralDirectors.com

Antonia was called home to heaven on May 7, 2021. She was born on October 18, 1924 in Detroit, Michigan to Italian immigrant parents, Michele and Giovanna Isca. She was the first of her sisters, Marcella, Rose, and Margaret to graduate High... View Obituary & Service Information

The family of Antonina Leach created this Life Tributes page to make it easy to share your memories.

Send flowers to the Leach family.