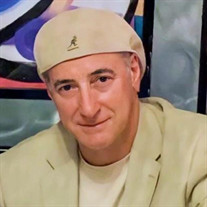 Ariano went home to be with the Lord and Savior while surrounded by his loving family on Tuesday, November 30, 2021. He restlessly and faithfully battled with cancer. Ariano beloved son of Frano and Adlije was born on April 12, 1964 in Tirana, Albania. Beloved husband of Nina Russo for 23 wonderful years. Loving father of Emma and Lauren Russo. Survived by his sisters and brothers in law, Diana Tasi, Rita and Pete Kore, Irma and Adriano Bocaj, George and Elvira Neci, Mario and Vilma Neci, son-in-law of Kristina Neci and several nieces and nephews. His journey with us on this earth was short and yet a successful and remarkable one. After living in Palermo, Italy Ariano settled in United States where he left us with unforgettable footprint. Ariano graduated with an Associate degree in Engineering Technologies. Ariano enjoyed working at Rock Tool and Machine in Plymouth, Michigan where he shared over 15 years of happy memories with his coworkers. Ariano and Nina welcomed their two beautiful daughters, Emma and Lauren, who were the most important part of his life. Ariano had a gifted artistic vision, and it was expressed throughout his handiwork in his house and diligently depicted in his landscaping work which later became the main attraction and center point of his subdivision. Ariano always referred to his artistic vision as the Lord’s vision for which he was simply blessed to receive. Ariano enjoyed jogging, reading, watching sports games, attending church and above all loved being with his family. Music spoke to him in a special way and at times he would get lost in the music . He was devoted to his wife, daughters and cooking for his family was his joy. Ariano looked forward to every holiday and family gathering and would always tease his family and challenge our knowledge on the wine vineyards and food preparation. He would go out of his way to cook delicatessen food and bring the best wine to the table to make us feel special. He had a bright personality with an amusing sense of humor and even during his challenge with cancer his faith was never lost. Ariano was faithful worshipper, and his faith was well demonstrated during his battled with cancer. He never questioned as why he was leaving us, he always said that the Lord called him. He will be missed and will live within us forever. The family will receive friends Saturday, December 4, 2021 from 9:30 am until the time of the service at 12 noon at Wm. Sullivan and Son Funeral Home, 705 W. 11 Mile Rd. (4 blocks E. of Woodward), Royal Oak. Interment will follow at Roseland Park Cemetery, Berkley.

Ariano went home to be with the Lord and Savior while surrounded by his loving family on Tuesday, November 30, 2021. He restlessly and faithfully battled with cancer. Ariano beloved son of Frano and Adlije was born on April 12, 1964 in Tirana,... View Obituary & Service Information

The family of Ariano Russo created this Life Tributes page to make it easy to share your memories.

Ariano went home to be with the Lord and Savior while surrounded...

Send flowers to the Russo family.