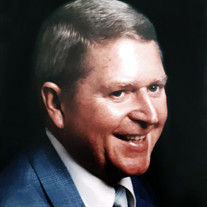 Arthur M. Richards, Jr., age 88, passed away peacefully on October 13, 2021 at his home. He was born on Jan. 22, 1933 in Hazel Park to Arthur Richards and Anna Phillipp Richards. He was a graduate of Hazel Park High School and met the love of his life, Lillie there. The couple were married just prior to Arthur leaving for the Army. He proudly served his country, attaining the rank of Corporal, and upon returning from the military, the couple made their home in Madison Heights where they raised their family. Art and Lillie were founding members of St. Dennis Catholic Church and made many sacrifices to send all five of their children to St. Dennis School and Bishop Foley High School. Early in his career, Art was employed as a draftsman in Pontiac. He attended Lawrence Technical Institute and went on to work as a process engineer at Warren Gear and Axel, which became GM Hydromatic, retiring after 33 years of service. Art enjoyed bowling and was the ultimate "do it yourselfer." He was very handy with so many projects, but especially took pride in restoring two Corvairs. In 2000, Lillie needed special attention due to being diagnosed with Alzheimer's and Art set aside all of his projects to become a devoted caregiver until she passed away in 2009. Theirs was a true love story! Beloved husband of Lillie. Loving father of Artie (the late Pam) Richards, Karen (John) Patrick, Debbie (Charlie) Roarty, Marie Richards and the late Cathy (Kent, still living) Pickles. Proud grandfather of 14 grandchildren and 20 great grandchildren. Dear brother of the late James Richards and William Richards. Funeral Saturday, in-state 9:30 am until time of funeral Mass, 10 am at St. Irenaeus Catholic Church, 771 Old Perch Rd., Rochester Hills 48309. Military honors will be rendered by the U.S. Army following Mass. Burial Oakview Cemetery, Royal Oak. Memorial contributions to Alzheimer's Association are appreciated. Share your memories at www.sullivanfuneraldirectors.com.

Arthur M. Richards, Jr., age 88, passed away peacefully on October 13, 2021 at his home. He was born on Jan. 22, 1933 in Hazel Park to Arthur Richards and Anna Phillipp Richards. He was a graduate of Hazel Park High School and met the love of... View Obituary & Service Information

The family of Arthur M. Richards Jr. created this Life Tributes page to make it easy to share your memories.

Send flowers to the Richards family.