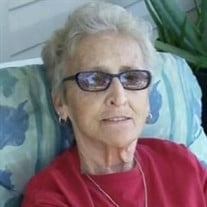 Barbara Jane Corn (nee Nash), age 78, resident of Brooksville, Florida, and formerly of East China Twp., Michigan, passed away on Sunday, May 1, 2022, in Brooksville, Florida. Daughter to the late Dennis and Dorothy (nee Eberly) Nash. Beloved wife of Calvin L. Corn and loving mother of Thomas (Sally) Corn, Mary (Tony) MacDonald, and the late Teri Sellers. Proud grandmother of Patricia (Freddy) Kanona, Jeffrey (Tabitha) Sellers II, Steve (Sarah) Sellers, Thomas (Savannah) Corn Jr., and Stephanie (Wyatt) Osborne. Dearest great-grandmother of Ashley, Malania, Julianna, Abigail, Logan, Jeffrey III, Wyatt II, Harrison, Samantha, Everett, and a great-great-granddaughter on the way. Dear sister of George (Jackie) Nash, Dorothy (Rick) Lemorie, Suzanne (Randy) Reiterman, and the late Billy (Betty) Nash, Alberta Sluga, Margie Nash, Diane Nash, Leah (Angelo) George, Charles Nash, Kenneth Nash. Sister-in-law of Carol Nash, and Debby Nash. She is also survived by many nieces and nephews and by her loving companion, Rosie the dog. Barbara was born September 18, 1943, in Detroit, Michigan. She grew up in Hazel Park, MI surrounded by her 10 siblings. As a child, she enjoyed dancing at sock hops. She attended Hazel Park High School. Barbara met Calvin in 1958 in front of Brey’s Hamburgers when Calvin was cruising the town with his cousin. It was love at first sight, the two were married October 3rd, 1959. Shortly after they welcomed three wonderful children- Tom, Teri, and Mary and moved to Royal Oak, MI. Barbara was an incredibly hard worker, both in and out of her home. When she wasn’t affectionately tending to her three children, taking camping trips, and volunteering in their scout troops, she was working as a waitress from the early 1960’s to the 1980’s. She then earned her real estate license in the late 1980’s and worked for Real Estate One until she retired in 1996. Barbara and Calvin then moved to East China where they lived along the Belle River. There, Barbara was an incredible homemaker and grandma. Barbara and Calvin were “snow-birds” as well, spending winters at their other home in Brooksville, Florida. In the Florida sun, Barbara enjoyed tending to her yard, spending time at Busch Gardens, taking walks with her dog, Stanley then Rosie, and going to the beach with her children when they visited. Barbara was an avid parishioner at Holy Cross Catholic Church in Marine City, MI and St. Frances X. Cabrini Parish in Spring Hill, FL. Among her many passions, Barbara was a crocheter and homemaker. She loved spending time in the kitchen, creating delicious meals for her family- noteworthy were her fried chicken and biscuits and gravy. After her retirement, travel was one of her favorite hobbies. She and Calvin toured the country in their RV, visiting National Parks, lighthouses, and almost all 50 states. Barbara and Calvin celebrated 62 years of marriage in October. Lovingly known as “Grandma Corn”, Barbara leaves behind a tremendous legacy as the matriarch of her family. She ensured her time was well spent with her grandchildren and great-grandchildren and believed in always putting family first. In recent years, she enjoyed multiple weddings of her grandsons and loved Facetiming with her great-grandchildren often. Grandma Corn was always good for a long chat and always had an anecdote or story to share. She instilled values in her children and grandchildren that have served them well. Barbara beat cancer in the early 2000’s and fought it again after being diagnosed in 2020. She spent the last year undergoing chemotherapy, but that didn’t stop her from doing the things she loved. She spent time with her children, crocheted blankets for her great grandchildren, and always had time for God, attending church weekly. Despite everything she went through in the last year, Barbara continued to insist on putting others before herself, a testament to her selflessness and stubbornness. Barbara lived an extraordinary life surrounded by love. She will be dearly remembered for her deep love, strong faith in God, hard-working spirit, and devotion to her family. Visitation at the Wm Sullivan & Son Funeral Home 8459 Hall Road (3 Blks E. of Van Dyke) Utica Wednesday, May 11 from 2-8 pm with a rosary at 6 pm. Instate at 11 am on Thursday, May 12 from Holy Cross Catholic Church 610 South Water Street Marine City until time of mass 11:30am. Interment White Chapel Memorial CemeteryTroy, Michigan Family request donations to St. Jude Children's Research Hospital 501 St. Jude Place, Memphis, TN 38105 www.stjude.org/tribute. Please share a memory at www.sullivanfuneraldirectors.com To send flowers or a memorial gift to the family of Barbara Jane Corn please visit our Sympathy Store.

The family of Barbara Jane Corn created this Life Tributes page to make it easy to share your memories.

Send flowers to the Corn family.