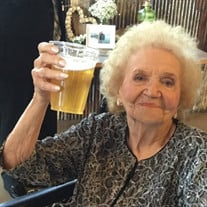 Our dearest Mimi, Betty Ann Johnson, passed away on September 23, 2021, surrounded by her loving children. Born on June 24, 1924 to Sarah and Sam Finley, she was the youngest sister to Jean Ann Campbell and Mary Louise Ellstrom. Betty grew up in Highland Park, Michigan. She received her Beauty Culture degree in 1941 and was a hairdresser at the Leland Hotel in Detroit, often styling the wives of the Detroit Tigers of that era. She met Edgar Johnson, the love of her life, upon his return from World War II. They were married on September 6, 1947. Betty and Ed had three children. June Ann Anderson, Michael Eddy (Latifa) Johnson, and Donna Sue (Michael) O'Brien. Some of her fondest memories were those spent with friends. They loved to golf, bowl, cook, and party together. Betty was a proud member of the American Legion, Elks, and Wapiti Club. She was a volunteer in the audiology department at Beaumont Hospital in Royal Oak for over 20 years, and a member of the Great Oaks and Red Run Golf Clubs. Our sweet Mimi was the very best grandmother to Kristen (John) Marinelli, Michael (Lisa) Anderson, Michelle (Chris) Wulf, Molly (David) Mangum, Michael O'Brien, and the late Kelly Ann Johnson. She was the proudest great-grandmother to Joey and Jake Marinelli, Michael and Ben Anderson, Jack and Alexa Wulf, and Endelyn Mangum. She got the greatest kick from her great-grandkids. She was so grateful for the friendship shared with her longtime caregivers Kelly Gee and Heidi Francis. Betty was the most selfless, caring, calm, and gracious person. She lived for her family, and just wanted us all to have fun and be careful. She will be deeply missed and forever loved madly by her entire family. In her honor, please consider making a donation to St. Jude Children's Hospital or Hospice of Southeast Michigan. Visitation at Wm. Sullivan and Son Funeral Home, 705 W. Eleven Mile Rd., (4 blocks east of Woodward), Royal Oak Monday 5 - 8pm. Funeral services will be held privately.

Our dearest Mimi, Betty Ann Johnson, passed away on September 23, 2021, surrounded by her loving children. Born on June 24, 1924 to Sarah and Sam Finley, she was the youngest sister to Jean Ann Campbell and Mary Louise Ellstrom. Betty grew... View Obituary & Service Information

The family of Betty Ann Johnson created this Life Tributes page to make it easy to share your memories.

Our dearest Mimi, Betty Ann Johnson, passed away on September...

Send flowers to the Johnson family.