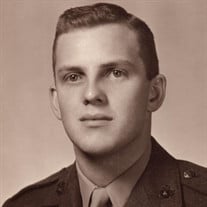 Bill Holmberg, age 82, 54 year resident of Utica, passed away on Tuesday, July 13, 2021 in Utica, Michigan. Born on July 2, 1939 in Detroit, Michigan to the late Thorwald and Dorothy (nee Foster) Holmberg. Bill served his country proudly in the National Guard and also in the United States Marine Corp. in Cuba during the "Bay of Pig's", he was also a decoder with high security clearance aboard submarines stationed in Japan in the early 1960's. Before leaving the Marines, he began his undergraduate studies. Bill met the love of his life and in 1964, he married Barbara Sivak,during their early years of marriage he would continue his education, working during the day and attending classes at night. He ultimately graduated from Wayne State University with his MBA. Bill and Barb made their home in Utica and raised a family and celebrated their lives in Utica for over 54 years, they celebrated their 57th wedding anniversary in June of 2021. Bill would retire from Chrysler Corporation in 2000. Retirement would not slow them down Bill and Barb bought a camper and over the following years traveled throughout the United States, even Alaska. He enjoyed hockey and music, and played defense with various local hockey leagues for many years. Bill loved opera and choral works, he enjoyed attending concerts at the DSO. He sang tenor with the Detroit Archdiocesan Choir and also sang with the Oakland Choral Society, where he participated in programs the included Verdi's "Requiem Mass" and Handel's "Messiah. He is survived by his beloved wife of 57 years Barbara Holmberg (nee Sivak), his loving children Kelly Koppelberger, Erik (Sheryl) Holmberg. Dearest grandchildren, Patrick Koppelberger, William Koppelberger, and Erika Holmberg. Brother of Patricia Condon and John (Ann) Holmberg. Also survived by many nieces, nephews, cousins, extended family members and many friends. A Celebration of Life Gathering will be held on Wednesday, July, 21 at the Wm Sullivan and Son Funeral Home 8459 Hall Road (3 Blks E. of Van Dyke) Utica from 6-8pm. Inurnment Glen Eden East Cemetery, Macomb Township, Michigan Family request donations to Alzheimer's Association 25200 Telegraph ~Suite 100 Greater Michigan Chapter, Southfield, MI, 48033 or N.A.M.I. 3803 Fairfax Drive Suite 100, Arlington, VA 22203 Please share a memory at www.sullivanfuneraldirectors.com

The family of Bill Holmberg created this Life Tributes page to make it easy to share your memories.

Send flowers to the Holmberg family.