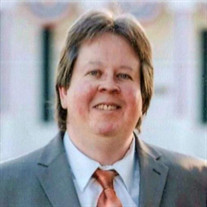 Brian James Hart, a lifelong resident of Royal Oak, passed away peacefully on March 3, 2022 at the age of 54. A son of Elmer and Mary (nee Ciszek), he was born on October 12, 1967 in Detroit. Brian graduated from Dondero High School in 1985 before earning his associate degree from Oakland Community College in 1988 and his bachelor's degree from Walsh College in 1998 in business administration. He made his career constructing circuit boards for MAKS, Inc. in Troy. Brian was a man of many passions. In his free time, he built models of planes, trains, and boats- even making a boat for every woman in his family with their name on it. Brian was a devoted fan of Star Wars, Star Trek, and The Walking Dead. He could take any computer apart and put it back together. When winter weather struck, Brian made sure to help his neighbors plow their snow. When Brian's parents grew older, he devoted his time to them and cared for them until their passing. Brian will be remembered for his humor, selfless love, and strong independence. Loving brother of Nancy (David) Guffey and the late David Hart. Treasured uncle of Diane (David) Sherrard, Sean (Heather) Hart, Ryan (Jaemie Gyurik) Hart, Dr. David (Brook MacDonald) Guffey Jr., Stacey (Michael Armstrong) Blixhavn, and Amy (Alan) Parenteau. Proud great-uncle of Abagail Sherrard, Gianna Hart, Chloe Hart, David Guffey III, Olivia Guffey, Addison Blixhavn, and Lucas Blixhavn. Former brother-in-law of Charlene Hart. Brian was preceded in death by his parents. A visitation for Brian will take place on Friday, March 11, from 3:00 pm until 8:00 pm at Wm. Sullivan and Son Funeral Directors, 705 W. Eleven Mile Rd. (4 blocks E. of Woodward), Royal Oak, 48067. A funeral service will be held on Saturday, March 12, at 1:00 pm at the funeral home. Interment to follow at Oakview Cemetery in Royal Oak.

Brian James Hart, a lifelong resident of Royal Oak, passed away peacefully on March 3, 2022 at the age of 54. A son of Elmer and Mary (nee Ciszek), he was born on October 12, 1967 in Detroit. Brian graduated from Dondero High School in 1985... View Obituary & Service Information

The family of Brian James Hart created this Life Tributes page to make it easy to share your memories.

Send flowers to the Hart family.