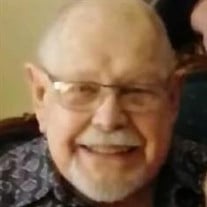 Bruce W. Austin, resident of Sterling Heights, age 88, entered into eternal life on Thursday, March 10, 2022. He was born into life on April 24, 1933 in Lupton, Michigan to the late James and Lorreta (nee Merriam) Austin. He was a proud Veteran... View Obituary & Service Information

The family of Bruce W. Austin created this Life Tributes page to make it easy to share your memories.

Send flowers to the Austin family.