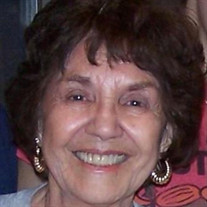 Clare Teresa Sendek Verras (nee Leonzio) died at her home on April 24, 2021. The youngest of three daughters, she was born on February 03, 1925 in Fort William, Ontario, to Maria and Quirino Leonzio. Clare and her mother and sisters moved to Cleveland, Ohio in 1937, following the death of her father in Italy. Clare graduated from Cleveland West Tech in 1943 and took a position as a comptometer operator during World War II. She met her husband, Leo ("Lucky") Sendek, a U.S. Army infantryman from Ironwood, Michigan at a dance in 1943 while he was attending training in Cleveland. He left for the European front shortly after they met and did not return to the States until 1946. Clare was a faithful correspondent during that time, and many of her beautifully written letters still exist to provide a rich family history to her children and grandchildren. Many of her letters recounted the dances she attended with her sister and many girlfriends, as well as the latest fashion and music trends. Clare and Leo were married in 1948 in Cleveland and moved to St. Ignace, in Michigan's Upper Peninsula, where Leo was stationed with the Michigan State Police. Clare gave birth to all three of their children (Diane, Bruce and Cathy) while they were posted in St. Ignace - a favorite Sendek family legend surrounds the expectant parents' 4 hour commute across the Straits on Mackinac by ferry and then on to the nearest hospital - in Petoskey-- for Diane's birth. From 1948 until 1968, the family traversed the Upper Peninsula - from St. Ignace to Calumet in 1958, and then to Munising in 1965. They faithfully made the 12hour trip in a station wagon back to Cleveland each Christmas (her favorite holiday) to be with Clare's family. Leo was named Post Commander for the Warren Michigan State Police post near Detroit in 1967 and moved his family at that time to Sterling Heights. Despite her love of and assimilation to life in the UP, Clare quickly re-acclimated to urban life. She took a job with the Macomb County Prosecutor's office, where her style, high spirits and beautiful smile made her an instant favorite. She loved the parties, restaurants and high fashion department stores of her new surroundings, and she especially enjoyed the swimming pool (and summertime to use it!) at her newest home. She was also happy to be closer to her extended family in Cleveland and Toronto and visited both frequently to participate in family rituals and celebrations. She and Leo also travelled to Hawaii, Mexico and Italy with her sister Dora and her husband. No matter where they went, Clare was always beautifully dressed and coiffed, and she never passed up the opportunity to practice her considerable skills on the dance floor. After Leo's sudden death in 1974, Clare continued her career at the Prosecutor's office, and devoted herself to the completion of her children's college and post-graduate educations, their marriages and the arrival of her many grandchildren. She always endeavored to celebrate these milestones and the holidays by gathering her loved ones together for copious amounts of food (especially her legendary spaghetti and meatballs), laughter, music and wine. In 1981, Clare married James (Jimmy/Greco/ Grandpa Jimmy) Verras and found new friends, enjoyment and opportunities to dress to the nines and go dancing through his job at WJBK-TV and his involvement in the Detroit Greek community. She continued to love celebrating the holidays (Christmas and Mother's Day were her favorites) and all things great and small with her many friends and family everywhere, but her greatest pleasure became her time with her children and their families - 10 grandchildren and, eventually, 10 great-grandchildren. She seldom missed a birthday, baptism, First Communion, dance recital, basketball game, shower or wedding. Her beautiful cards marking special days were heavily underlined and always signed "Baci, Baci!!!!" She always looked stunning, and she danced whenever there was music. Clare leaves her three children - Diane (Giorgio) Marchese, Bruce (Catherine), and Cathy (Harold) Haftka; 10 grandchildren - Scott Sendek, Timothy Sendek, Christopher Marchese, (Dr.) Alexis Haftka George, Sara Sendek, (Dr.) Adriane Marchese, (Dr.) Lauren Marchese, Chelsea Haftka Nakken, Michael Sendek and Daniel Sendek; and 10 great-grandchildren - Leo Sendek, Carter Sendek, Emily Marchese, Joseph Marchese, Adelyn George, Hadley Sendek, Clara Nakken, Isobel Sendek, Julia Nakken and Eli George. She is also survived by her brother, Rocco Urbisci; and 3 nephews - Nicholas Marchiano, Michael Marchiano and Jason Urbisci. Clare's family is overwhelmingly grateful to the loving and devoted caretakers who made it possible for her to enjoy the peace and comfort of her own home for her last five years, especially Anna Turchyn (who became Clare's guardian angel) and Tanya Polivchuk. Their thanks also go out to Nurse Ali and the other team members from the hospice Heart 2 Heart for their caring and compassionate assistance.

Clare Teresa Sendek Verras (nee Leonzio) died at her home on April 24, 2021. The youngest of three daughters, she was born on February 03, 1925 in Fort William, Ontario, to Maria and Quirino Leonzio. Clare and her mother and sisters moved... View Obituary & Service Information

The family of Clare T. Sendek-Verras created this Life Tributes page to make it easy to share your memories.

Send flowers to the Sendek-Verras family.