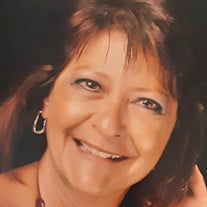 Dalia "Dolly" Garcia Cotter died peacefully on April 3, 2022, she was 70 years old. Dolly was born on November 11, 1951. She is survived by a daughter, Michelle (Tom) Jennings; two grandchildren, Richie and Lily; a sister, Blanca Knowlton; and brothers, Al (Juanita) Garcia, Melecio Tito (Kathy) Garcia and Gil Garcia. She is preceded in death by her parents, Josephina Medina and Melecio Garcia; sisters, Nasaria Downer and Zoila Ramirez; brothers, Ernie Garcia, Frank Garcia and Jerry Garcia. She was the loving aunt of many nieces and nephews. Dolly was a graduate of Lake Orion High School, class of 1969. After graduation, she earned her cosmetology license and celebrated a lifelong career as a successful hairstylist working at several salons. She was the owner of Dolly's Salon on Highland Road for 16 years. One of her many joys was making people look and feel beautiful for their special occasions. In addition, she was an outdoors enthusiast. Spending time on her pontoon or being anywhere near the water was what she called "my happy place." Sadly, Dolly battled lung and brain cancer in her final months. Dolly's spirit never wavered during her treatments and courageously fought with everything she had leading up to her final days. A special thank you to Dolly's niece, Dolores (Albert) Borrego, and Dolly's brothers, Tito and Gil, for the unconditional love they showed her. Dolly was blessed to have a large circle of friends and family that were always there to offer their prayers, support and encouragement. A Celebration of Life will be held on Saturday, April 23, 2022 from 1-4 p.m. at Deer Lake Athletic Club in Clarkston. Flowers may be sent to Deer Lake Athletic Club on or after April 22, 2022.

Dalia "Dolly" Garcia Cotter died peacefully on April 3, 2022, she was 70 years old. Dolly was born on November 11, 1951. She is survived by a daughter, Michelle (Tom) Jennings; two grandchildren, Richie and Lily; a sister, Blanca Knowlton; and... View Obituary & Service Information

The family of Dalia "Dolly" Cotter created this Life Tributes page to make it easy to share your memories.

Send flowers to the Cotter family.