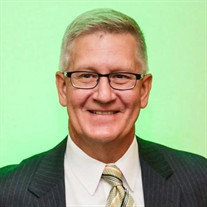 David W. Elliott, age 63, was suddenly called home to be with his Lord and Savior on November 5, 2021. He was a beloved husband, devoted dad, dear brother, and proud Pop Pop. Born on July 22, 1958 in Woburn, MA, Dave was the third of the four Elliott children whose parents were Bob and Mae Elliott. He was a long-time resident of Fraser, MI, but spent his childhood and young adult years living in many different places because of his father's service in the US Army - including Massachusetts, Texas, Colorado, and even Heidelberg, Germany for a time. David grew up with a love of the outdoors which took him hiking and backpacking through many national parks. He earned a Bachelor of Science in Recreation from the University of Colorado, and later earned a Bachelor of Science in Education from Wayne State University. David's career included being a middle school teacher at Warren Consolidated School District for over 20 years. He taught science, social studies and language arts at Fuhrmann, Grissom, and Carleton Middle Schools. In his retirement years he was a Patient Sitter for Ascension Hospital where he spent many hours as a bright light comforting and talking with patients as they recovered and healed. David married Kristine Stump Dietzel on November 26, 1999 in Fraser, MI. The couple made their home in Fraser and were members of Warren Woods Baptist and then later the Royal Oak Church of Christ. His hobbies were vast and included golf, playing guitar, reading, caring for his immaculate yard, watching freighters, and walking his beloved dog, Hunter. He had a deep, personal faith and spent every day in prayer. Most of all, Dave loved to make people laugh and his most valued time was spent with his family. Dave was preceded in death by his parents, Bob and Mae Elliott and his brother, Rob Elliott. He is survived by his wife Kristine; daughter and step-daughters Katie (Mike) Turner of Colorado Springs, CO, Stephanie King of Harrison Township, MI, Laura (Ken) Shum of Clarendon Hills, IL; sisters Susan Taylor of Oro Valley, AZ and Paula (Joel) Ladefoged of Monte Viste, CO; along with his grandson Sullivan Turner, step-granddaughters Madison and Olivia Shum, and many nieces and nephews. A private family burial will be held on Monday, November 15, followed by a service open to all his friends and family at 1 pm at Royal Oak Church of Christ, 115 S. Campbell Rd., Royal Oak 48067. Share your memories at www.SullivanFuneralDirectors.com.

David W. Elliott, age 63, was suddenly called home to be with his Lord and Savior on November 5, 2021. He was a beloved husband, devoted dad, dear brother, and proud Pop Pop. Born on July 22, 1958 in Woburn, MA, Dave was the third of the four... View Obituary & Service Information

The family of David W. Elliott created this Life Tributes page to make it easy to share your memories.

David W. Elliott, age 63, was suddenly called home to be with...

Send flowers to the Elliott family.