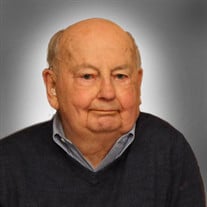 David Edward Susalla February 3, 1928 - October 23, 2021 David Edward Susalla, age 93, of Fox Run in Novi, passed away on October 23, 2021. Dave was a caring, intelligent, easy-going man with a sense of humor who spoke with kind words. For years, he gardened, sailed and camped when his children were young, played bridge with several groups, liked reading, and especially enjoyed vacationing on Jekyll Island, GA. Born in Detroit in 1928, Dave was the oldest of David T. and Bertha (Zinger) Susalla's eight children. He was a Boy Scout, had a paper route, and worked in a soda and grocery shop. His first car was from his maternal grandfather's undertaking business in Ubly, MI -- a white ambulance (no seat belts required and a lot of people could be crammed in). His next car was a red Plymouth convertible that Dave fell in love with while working at the Plymouth factory. Dave graduated in 1946 from St. Benedict in Highland Park and enlisted in the US Army at age 18 so he could obtain a college education. He was a corporal, serving at Fort Ord, CA and in the Army of Occupation in Augsburg and Freising, Germany as a technician/clerk typist. Dave used his army cigarette allotment to buy stamps oversees, the beginning of his stamp and coin collecting hobbies. Dave was recalled during the Korean War, serving at Fort Custer in Battle Creek. Dave was in the business fraternity Delta Sigma Pi and graduated from University of Detroit in 1954 with a BS in accounting. He worked at Chrysler from 1955 until he retired in 1983, including years as a Budget and Analysis Supervisor with Chrysler Marine in Centerline. Dave studied and obtained his MI real estate broker license, working with ReMax in Royal Oak. Dave volunteered where needed, served on the school board and parish council steering committee, was school bus co-chair (sometimes driving the school bus), and was active with Clawson Lions Club. A long-time resident of Royal Oak, Dave donated his time at the senior center preparing tax returns for AARP. Dave was a diligent worker in every position he held. When Dave returned from overseas, he joined some St. Benedict boys going to a dance at St. Mary's in Royal Oak. There he met the love of his life, Jeanne Hagerty, who became his soulmate for 66 years of marriage. After dating for awhile, Dave and Jeanne married August 27, 1955 -- they raised a family together and were foster parents for Catholic Social Services, with Dave taking his turn getting up at night with newborns. Dave and Jeanne were members of Guardian Angels in Clawson, Our Lady Queen of Martyrs in Beverly Hills, and Holy Family in Novi. They enjoyed eating out together, sharing family holidays and vacations, and travelling to their granddaughters' school and sport events, never missing a "grandparents" day. Dave roller-bladed with his granddaughters, played with them at the park behind Dave and Jeanne's N. Verona Circle home, cheated for his granddaughters during heated "Spoons" games, and proudly attended their high school and college graduations and weddings. Dave was a devoted family man and will be sorely missed by his wife, Jeanne; children Douglas Susalla, Janis Susalla Foley (Chris Foley), and Jay Susalla (Cindy Lewis-Susalla); granddaughters Shaylen Foley (Kyle Compton), Eliza Foley (Eric Szymanski), and Natasha Foley; darling 10-month old great-granddaughter Portia Joy Foley-Compton; sisters Angela Susalla, OP, Elaine Campbell, and Karen (Gary) Swaim; in-laws Shirley Handley and Joan McCabe; and nieces, nephews, and extended family. Dave joins his parents, four siblings (Elda, Ernest, Thomas, and Larry), and other relatives and friends in heaven. The family thanks staff at Seasons Hospice and Rose Court Continuing Care for helping Dave these last few months. Visitation is from 4-8 PM Friday, October 29, at Sullivan and Son Funeral Home, 705 W. 11 Mile Road, Royal Oak with a prayer service at 7:15 PM. A celebration Mass is at 11:00 AM Saturday, October 30 at Catholic Church of the Holy Family, 24505 Meadowbrook, Novi, with visitation at 10:30 AM in the church, and 1:00PM interment in The Veterans' Field of Honors at Oakview Cemetery, Royal Oak. Donations in Dave's honor may be made to the Catholic Church of the Holy Family or charity of the donor's choice. Share a memory at www.SullivanFuneralDirectors.com.

The family of David E. Susalla created this Life Tributes page to make it easy to share your memories.

Send flowers to the Susalla family.