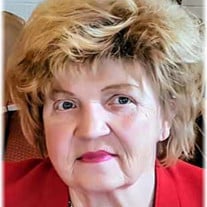 Delphine Farnsworth Obituary In good Polish tradition, Delphine Farnsworth (Grucz) was born in Hamtramck, Michigan on June 23rd, 1941. Later in life she attended Mount Clemens High School. Delphine (Del) met Kenneth Farnsworth at a soda shop in Mount Clemens, Michigan. As a result of the persistence of Ken, the two were married on July 25, 1959. They lived in Mount Clemens for a brief time, then in a starter home in Warren and soon returned to Mount Clemens to build a ranch home on a lovely country lot. There they raised most of their children: Kenneth (Tammie), Susan (Philip), Kristin (Greg)and the late Mark (Alicia). Things weren't always easy, and in his late 40's, Delphine's husband was diagnosed with Parkinson's Disease. Delphine, always being a helpful and giving person, tirelessly took care of Kenneth for 15 years, till he was called to his heavenly home. Del not only took care of Ken, but was there for many who had physical needs. She always gave hope and helped those who were struggling. 15 and 15, that was important to Del. That is the number of her grandchildren and great-grandchildren. Add to that, her four children and their spouses. Always, no matter how big or small, every one of them received a Christmas present. Her care and concern also came with a lot of energy; that we all acknowledged we could not keep up with. For example, at 70 years old, one of her grandchildren in Florida was very ill and what did Del do? She did something the rest of us wouldn't have even thought of, she drove all the way, straight through from Michigan to Florida, by herself, to be by that grandchild's side. Hospitality was also shown with this great energy. Whether you were over for dinner or came to the cottage, her energy never ceased and she always served her family as well as others. That energy came with many talents, including her cake decorating. You may have had a cake made by her for many of your birthdays or you may have been military personnel at Selfridge Air Force Base who also enjoyed these delights. Paramount in the life of Del was her God. She confessed Christ's forgiveness and the certainty of salvation, first to her family and to everyone she met. Over the years she taught many Bible studies, was involved in Sunday school and participated in formal evangelism groups at churches. In her last days it was evident to everyone around her, even the pastors who visited her, that of her confidence and certainty and hope in the resurrection of our Lord and Savior Jesus Christ. "I am not ashamed of the gospel of Jesus Christ it is the power of God unto salvation" Romans 1:16

The family of Delphine Marie Farnsworth created this Life Tributes page to make it easy to share your memories.

Send flowers to the Farnsworth family.