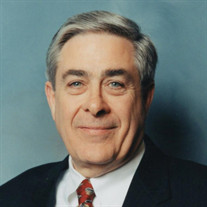 DENNIS P. MARKEY of Bloomfield Hills, MI peacefully passed away at home surrounded by family on Wednesday, April 28, 2021. He suffered for several years with a degenerative neurological disorder, Progressive Supranuclear Palsy (PSP), which ultimately ended his life. Dennis was 79 years old. Dennis is survived by his wife Betty (Merchel) of 57 years and his children, grandchildren and 2 great-grandchildren, Sloane and Jakob. Sloane and Jakob told the family that "Papa is dancing with the angels." Dennis was much loved by his parents, the late Arthur and C. Louise Markey, and his brother, the late Raymond Markey. Dennis was a friend and mentor to many. Dennis graduated from the University of Detroit Jesuit High School and later attended Lawrence Tech University. Dennis was proud to say that he worked during his early teenage years and never stopped working as he transitioned into a successful entrepreneur. His career began at DeVlieg Machinery in Royal Oak as a draftsman. The education was invaluable to his later decision to transform the world of wooden storage buildings. In 1976, he was employed by Dealers Wholesale under the leadership of Nick Martin, Jr. who later became an important mentor in Dennis' life. His next venture, with the support and guidance of Nick Martin, became Markey Brothers Wholesale Lumber Company, which he started with his late brother, Lawrence Markey. When the economy faltered, the brothers parted ways and Dennis began Marco Wood Products with Kirk Martin. In 1978, Handy Home Products (HHP) began its run taking a chance by embarking on a 20+ year adventure into the pre-fab, wooden storage building business. They focused on the idea that anyone could build a backyard shed (Slogan: You can do it in 2 hours) and wanted to provide a quality product that could withstand harsh, Midwest winters. In those first years, they introduced the Handy Hut to the Chicago Home Show and ended up walking away with the Innovator of the Year Award. The Handy Hut became a staple in backyards throughout the United States and ultimately reached the international consumer in Europe and Asia. On the humanitarian side, Dennis spoke of being greatly impacted by his time in Guatemala and HHPs efforts to provide families with specially designed Handy Huts to help them have safe and reliable housing. After a strong run, Dennis and Kirk decided to sell Handy Home Products, leaving the shed world behind. Dennis retired soon after, in 2005. Outside of his work at HHP, Dennis mentored high school students in math through Warren Consolidated Schools for a few years. He also joined The Executive Committee (TEC 11) which brought together CEOs to learn from and with each other. He was recognized in 1999, 2001, and 2004 for significant contributions to TEC. In 2002, he was awarded TEC's highest honor, The Flying Eagle award, for his contribution to the organization and his fellow peers. In his free-time, Dennis turned to boating. In 1998, he became a "stink" boater. Dennis and Betty joined the Grosse Pointe Yacht Club and later (2000) became members of the Old Club on Harsens Island. Dennis became involved in the Old Club leadership and eventually became Commodore in 2009. Although Dennis was generally known as a fairly introverted guy, he and Betty often attended Old Club Saturday dinners donning costumes for the theme of the week. On one particular non-costume Saturday dinner, he decided to surprise the crowd by arriving in full Elvis garb- cape and all. Outside the more formal edges of the Old Club, Dennis enjoyed exploring Muscamoot Bay on the Sea-doos, taking boating excursions around Lake St. Clair, napping, and watching amazing sunsets night after night. Unfortunately, in 2017 Dennis had to leave this part of his life behind when PSP made it impossible for him to take part in anything active. During the months before he passed Dennis, aka Papa, (1) loved watching his great-grandchildren, Sloane and Jakob, play, (2) enjoyed his granddog, Buster, who often sat by his side, (3) taught the family how to make his notorious Caesar Salad dressing, (4) gave us all an appreciation for his love of root beer floats. Dennis will be missed by his wife, Betty, his children, grandchildren, great-grandchildren, and the many friends and colleagues who have loved and supported him over the years. Donations in Dennis' memory may be made to Cure PSP, 1216 Broadway, 2nd Floor, New York, NY 10001.

The family of Dennis Patrick Markey created this Life Tributes page to make it easy to share your memories.

Send flowers to the Markey family.