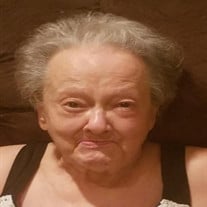 The value of life is in the memories you leave behind. Diana M. Roy, 86 was called home to the Lord on July 6, 2021, and in true "GG" fashion gave her family one last story that defined the relationship and bond she shared with her family. Diana, better known as "GG" was gentle, soft-spoken, and made the best pancakes around. She was also very calculated and stealthy which were catalysts for a good time and getting us all in trouble. She disliked attention but was the life of every family party that often involved staying up too late, laughing at nothing until we peed ourselves, sneaking her snacks - mostly cake, or going on "adventures" at 3am, meaning we were coming home with a cake or dog. Whatever we were doing, it was always the newest "best experience ever"! Diana graduated from Highland Park High School and started working as a nutrition counselor at Detroit Osteopathic Hospital. Diana married Jack in 1955 and together they raised 3 kids, 32 rabbits, and an unknown number of dogs. Caring for animals, particularly dogs gave Diana her true purpose in life, it is where she found the greatest happiness. Diana has collectively rescued and saved the lives of over 300 dogs during her time on earth. Diana was preceded in death by her parents, Adelare and Helen Quintal; sister, Delorse; brother, Edward; husband, Jack; and two dogs, Fluffy and Jazz. She is survived by her 3 children, John, Robert (Pam), and Deborah (Ken); eight grandchildren, and 6 great grandchildren, one of which she referred to as "Tattlin-Talan" often grumbling with defeated frustration over the small amount of cake she was allotted, "Gee, can you spare it?" GG was able to pass on a legacy of love, adventure, and her secret stuffing recipe because she taught us the importance of family, devotion, compassion, and to show selflessness. For more than 25 years, GG required assistance with daily living activities which transitioned to total care for most of those years. Her daughter, Debbie provided that support to her without hesitation, and because of that we are granted with the unforgettable memories that death cannot erase. "Unable are the loved to die, for love is immortal." - Emily Dickinson

The value of life is in the memories you leave behind. Diana M. Roy, 86 was called home to the Lord on July 6, 2021, and in true "GG" fashion gave her family one last story that defined the relationship and bond she shared with her family. Diana,... View Obituary & Service Information

The family of Diana M. Roy created this Life Tributes page to make it easy to share your memories.

The value of life is in the memories you leave behind. Diana...

Send flowers to the Roy family.