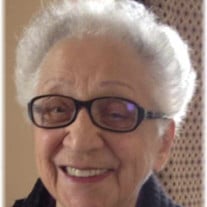 Diane Agnes George, 106, of Sterling Heights, Michigan, passed away surrounded by her family on January 25, 2022. Diane was born September 29, 1915, to William and Nora Shikany in Minneapolis. They moved to Detroit when she was thirteen years old. After graduating high school she attended a business college and worked in the office of a factory until she met her husband, Leo. After raising their children and after the death of her husband Leo, Diane started a new career at the Social Security Administration Office in Detroit where she worked as assistant to an Administrative Law Judge until she retired in 1989. When Diane was younger, she prayed that she would marry a wonderful, loving, and caring man. She also prayed she would have three boys and three girls. God answered her prayers to her exact wishes. Mom met the love of her life, Leo George, when she was 27. They married in 1943 and had six children. Their children were raised with a love of God and church. Mom’s family loved visiting her and she loved to cook for them. She was well known for making three items which are still affectionately known as "Grandma's Chicken", "Grandma's Rice", and "Grandma's Salad", they learned from her. She lovingly taught them step by step on how to replicate those dishes. They quickly discovered their own version would never be as good as grandma's. As each family would pull out of her driveway, they knew grandma would make the sign of the cross and say a blessing for each family as they left. Mom was an active member of St. Maron Church, where she started the Adoration Chapel at St. Maron’s Church in Detroit, Michigan. She made many pilgrimages with her daughter, Mary Ann, to Medjugorje, Bosnia. In her later years, she moved in with her two sisters, Sadie and Jeanette. The Family knew there was a strict "no contact time" for them because of their daily poker party with friends. Her family knows how much she loved to sing- especially her favorite, "You Are My Sunshine". For Mom's 100th birthday all of her children, grandchildren, and great grandchildren came in from across the country to celebrate her. She was moved to tears as she listened to her grandchildren and great grandchildren sing her favorite song “You are my Sunshine”. Not all songs were real, either, but to her grandkids, they were. They were familiar with her seatbelt safety song, "Buckle Up For Safety...Buckle Up!" More embarrassing for them was when they were young and she altered the words to a popular nursery rhyme. She changed the words "twinkle twinkle" to "tinkle tinkle". When they would use the restroom she would sing, "Tinkle Tinkle Little Star..." Even though it was enough to embarrass them, they would chuckle and loudly sing along to make her laugh. Years later, they would sing the same version of the song to their own children. Mom was greatly loved by her family: Leonard (Verna) George, Mary Ann (Don) Ganim, Carol George, Howard (Mary) George, Lorry (Fred) Ganem, and Gary (Glenna) George. She leaves behind fifteen grandchildren and twenty-nine great-grandchildren, and her nieces and nephews. She is also survived by her aides, Ruth and Toni, who mean so much to our mom and her family. Our mother is at peace and is with those she loved and missed for so long who preceded her in death. Her loving husband, Leo, her parents William and Nora Shikany, her siblings Vera Deeby, Woodrow Woody, John Shikany, Sadie Abraham, Edmond Shikany, and Jeanette Aesy, and most recently, her daughter Mary Ann Ganim. Family will receive friends Monday, January 31, 2022, at 9:30 a.m. until 10:30 a.m. the time of her Funeral Mass at St. Sharbel Maronite Catholic Church, 43888 Hayes Road, Clinton Township, Michigan. For those unable to attend the Funeral Mass, please, go to sullivanfuneraldirectors.com web page for it will be streamed live. If you have any questions or concerns, please, call us at Wm. Sullivan & Son 586-731-2411. In lieu of flowers family request donation to Right to Life, St. Sharbel Maronite Catholic Church or St. Jude Children's Research Hospital. Please share a memory with her family at www.SullivanFuneralDirectors.com

Diane Agnes George, 106, of Sterling Heights, Michigan, passed away surrounded by her family on January 25, 2022. Diane was born September 29, 1915, to William and Nora Shikany in Minneapolis. They moved to Detroit when she was thirteen years... View Obituary & Service Information

The family of Diane Agnes George created this Life Tributes page to make it easy to share your memories.