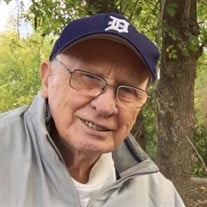 Donald A. Wilson, age 89, of Royal Oak, Michigan (formerly of San Carlos, California), passed away September 23, 2020. Don was born on November 26, 1930 in Royal Oak to the late Robert Thomas Wilson and Matilda Kerr Wilson. Don was a dear friend and special uncle. As a 1949 graduate of Royal Oak High School, he never failed to keep in touch with his beloved lifelong friends. Don worked in the insurance industry for decades. He began as a mail clerk, working in the historic Maccabees Building in Detroit until he moved out West in the 1950's. He was employed in various roles, until a position came along at American President's Line. Don was employed there until 1975, where he worked for California Casualty until his retirement in 1993. At work, he was a programmer in the early days of computer data using languages such as Autocode, FORTRAN, Comtran/Cobol, Basic, Pascal, and Forth, to name a few. Don enjoyed all people, and continued making new friends until the end of his life. Don traveled around the world, and had a special smile whenever he shared his memories of Spain and Hawaii. In 2014, after many years in sunny San Carlos, CA, he made his way back home to reside in Royal Oak, Michigan, to age with family. In this decision, he gave his big brother, Robert "Pete" Wilson's family and other family members a great gift: All were able to enjoy his wonderful sense of humor and witness his bravery in the face of adversity. Don is survived by his sister, Nancy Perkins, and his nieces and nephews: Robert (Patricia) Wilson, Beth Wilson (Pete O'Leary), Jim (Sarah) Wilson, Lori (Kory) Musket, Lisa Wilson (Dan Dobie), Laura Mitchum, and two additional generations of nieces and nephews. He is further survived by his close friend, Sally Gibson, as well as Kelly Micale and Christine Gibson, to whom Don was an attentive Godfather. Don was predeceased by his parents, his other siblings: Eva Wilson Tromble, Mary Johnson Potter, Elsie Johnson Church, and Robert T Wilson, as well as his nephew, Russell P. Wilson. A private memorial service for the family will be held at Greenfield Presbyterian Church, Berkley, Michigan, where donations may be sent in Don's memory. Please share a memory on the Tribute Wall at www.SullivanFuneralDirectors.com .

The family of Donald A. Wilson created this Life Tributes page to make it easy to share your memories.

Send flowers to the Wilson family.