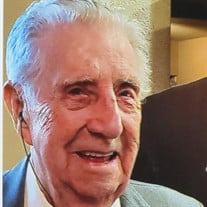 Douglas Van Wormer, of Sterling Heights, passed away peacefully on September 27, 2020. Douglas is survived by his cherished wife of 62 years Lorice; the loving father of Jane (William) Parks, Tammy (Keith) Locke, and Lori Van Wormer; the adored grandfather of Joshua Abbey, Thomas Locke, Kaitlyn Locke, Jacob Locke, Jessie Zurgable and Derek Zurgable; and the beloved great-grandfather of Logan. He is preceded in death by his brother, Jack Van Wormer and his son Douglas Van Wormer Jr. Douglas proudly served his country during the Korean War in the United States Army. After he was honorably discharged, he worked for Philco Ford as an electronic technician where he traveled throughout the United States. When they settled down in the Clawson area, he started working with General Electric. He worked with GE for 25 years. When he retired in 1988 at the age of 60, they moved to Alpena where he could better enjoy his hobbies; hunting, fishing, golfing, riding his four-wheeler with his grandchildren, hiking with his family in the woods, and sitting around a campfire. He also enjoyed showing his slides and movies of his time in the service, his travels, and other family memories. Douglas loved playing card games- euchre, pinochle, and any others you could imagine, as well as listening to Frank Sinatra. After retiring, they also became snow birds and spent half the year down in Florida at the Rice Creek Adult RV park. They made many friends when they were there, and Douglas always looked forward to happy hour at 4pm. When they moved back to metro Detroit a few years ago, they made their home at Pine Ridge of Hayes. There Douglas made many friends as well. He enjoyed spending his time playing in euchre and pinochle tournaments. They even held a senior prom there, and both Douglas and Lorice were nominated for Prom King and Queen! Douglas was an avid University of Michigan fan and he always tried to catch Tiger Woods playing on the weekends. He will be dearly missed. Douglas' family will receive friends for visitation on Friday, October 2, at the Wm. Sullivan and Son Funeral Home, 8459 Hall Road (3 blocks East of Van Dyke), Utica from 2:00 p.m. until 8:00 p.m. A funeral service will be held at the funeral home on Saturday, October 3, starting at 11 a.m. Masks are required to enter the funeral home. The funeral service will be webcasted and live-streamed on the funeral home website. Memorials are appreciated to Hospice of Michigan, 43097 Woodward Avenue, #102, Bloomfield Hills, Michigan, 48302 or at www.hom.org. Please share a memory at www.SullivanFuneralDirectors.com.

The family of Douglas Van Wormer created this Life Tributes page to make it easy to share your memories.