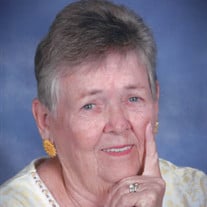 Elizabeth "Bette" Nelson May of Northport, Florida passed away peacefully on January 27th. Bette was born and raised in Grosse Pointe, Michigan, where she was the head majorette at her high school. Bette was proud of her Scottish heritage, she met her husband of 61 years, "Bob" when they were both in a musical play put on by Clan Scot. Bob proposed 6 weeks later, they were married May 23, 1953 at Grosse Pointe Memorial Church. Shortly after the wedding they moved into their brand-new home in St. Clair Shores where they raised their 3 daughters. Bette had several jobs but the most fulfilling was being a mom. Bob and Bette took a chance and bought the plumbing company that Bob worked for and she was immediately promoted to Vice President, together they ran the company until the love of golf had them selling everything in Michigan and moving to Florida. Bette was an excellent golfer and took great pride when she would beat most of the men in the league. One of Bette's favorite places was Grand Bend Canada, her parents bought a cottage there when she was a teenager, summers were spent on the beach, strolling Main Street and at the outdoor roller- skating rink. This love she passed on to her children and grandchildren. She was the happiest when all of her family was together at the cottage. Bette was an amazing seamstress, she loved bowling, fishing, golf, bocci, Bingo and her Friday night dinners with her friends. It was important to her that she laughed every day. Bette is now in heaven with the love of her life, her brother and parents and is survived by her daughters Margaret Klarr, Judith Ross, Laurie Reynolds (Paul), grandchildren Brandice (Mike) Leich, Robert (Hillary) Klarr, Alissa (Kurt) Jurek, Andrew (Shannon) Klarr, Shauna (Jeremy) Zimmerman, Brett (Taylor) Adams, Alexa (Cameron) Adams and 14 great-grandchildren. Friends and family will gather on Friday, February 11th, from 10:00 am until time of memorial service at 11:00 am at Wm. Sullivan and Son, 8459 Hall Rd., Utica, 48317.

Elizabeth "Bette" Nelson May of Northport, Florida passed away peacefully on January 27th. Bette was born and raised in Grosse Pointe, Michigan, where she was the head majorette at her high school. Bette was proud of her Scottish heritage, she... View Obituary & Service Information

The family of Elizabeth May created this Life Tributes page to make it easy to share your memories.

Elizabeth &quot;Bette&quot; Nelson May of Northport, Florida passed away...

Send flowers to the May family.