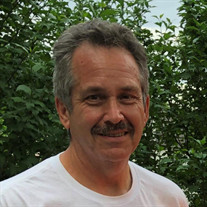 Eugene “Gene” Schoenherr, of Shelby Township, passed away on April 30, 2022, at the age of 63. Gene, the cherished husband of Lori Schoenherr; the loving father of Sarah and Michael (Amber); the adored Grandpa of Brody, Sloane, and Mila; the beloved brother of Ann (Dave) Schweiger, Paul Schoenherr, Michael (Diane) Schoenherr, Anthony (Julie) Schoenherr, the late Theresa (Jay) Toomey, the late David (Margie) Briggs; the dear son-in-law of Basil Briggs, and the late Sandra Briggs. Gene also leaves behind many Godchildren, nieces, nephews and cousins who will miss him dearly. Gene is preceded in death by his parents, Eugene J. and Bernadette. “Grandpa always said, family comes first” and that was important to Gene. His grandchildren had a special place in his heart. He was known as a jokester to all the kids and could tell a good story. He had a heart of gold and was always willing to help with whatever he could. Gene graduated from Stevenson High School in 1976. He continued his education with night classes at Macomb Community College and then completed his schooling at Lawrence Tech, where he received a Bachelor of Science degree in Mechanical Engineering. After more than 30 years working for Chrysler, Gene retired in 2020. True to the engineer form, Gene could fix just about anything and liked making things in his woodworking shop. He was a wine connoisseur and enjoyed making his own wine. Gene had a love for the outdoors. A few of his favorite pastimes were hunting, fishing, camping, golfing and hockey. He ultimately enjoyed spending time with family at the cabin in Lewiston. Gene was a man of faith. Traditions were important to him. He strived to follow in his father’s footsteps and words of wisdom. Gene’s family will receive friends for visitation on Wednesday, May 4, and Thursday, May 5, 2022 at the Wm. Sullivan & Son Funeral Home, 8459 Hall Road (3 blocks East of Van Dyke), Utica, from 4:00 p.m. until 9:00 p.m. both nights. A rosary service will be held at 7:00 p.m. on Thursday. A funeral mass will be held on Friday, May 6, 2022, instate from 10:00 a.m. until the time of mass at 11:00 a.m. at St. Kieran Catholic Church, 53600 Mound Road, Shelby Township. Memorials are appreciated to St. Jude Children's Research Hospital, 501 St. Jude Place, Memphis, TN 38105 or at www.stjude.org/tribute, or the Capuchins, 1820 Mt. Elliott Street, Detroit, MI 48207 or at www.thecapuchins.org. Please share a memory at www.SullivanFuneralDirectors.com

Eugene &#8220;Gene&#8221; Schoenherr, of Shelby Township, passed away on April 30, 2022, at the age of 63. Gene, the cherished husband of Lori Schoenherr; the loving father of Sarah and Michael (Amber); the adored Grandpa of Brody, Sloane, and... View Obituary & Service Information

The family of Eugene M. Schoenherr created this Life Tributes page to make it easy to share your memories.

Eugene “Gene” Schoenherr, of Shelby Township, passed away on...

Send flowers to the Schoenherr family.