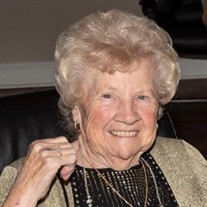 Evelyn Allan, age 93, passed away on September 27, 2020 at her home in Royal Oak. She was born on April 11, 1927 in Edinburgh, Scotland to Francis McCartney and Louise Barclay. She met her husband, James, in Scotland while he was serving with the British Merchant Navy. Evelyn came to the United States when she was 21. She and James were married on December 31, 1948 in Ferndale and made their home in Royal Oak. Evelyn enjoyed sewing, cross-stitching and preparing meals for her family. In her later years, she liked going with the gals in the family to play the slots at the casino. Her pride and joy was her family and she was often found cheering on her grandchildren and great grandchildren at the various events that they participated in. Evelyn was the true matriarch and family life centered around her home. Evelyn and James were the type of couple that people wanted to emulate and were gracious in sharing their time and talents with everyone. Beloved wife of the late James. Loving mother of James Allan, Catherine (Gerald) McConnell, David Allan, Deborah (Richard) Nagel, Patricia Anne Allan and the late Jane Louise Allan. Proud grandmother of Robert Allan, Scott McConnell, Shannon McConnell, Jacob (Robin) Nagel, Jordan (Breanne) Nagel, Shawn (Kristin) McConnell, Patrick (Sara) Nagel, Lisa (Matt) Hurd, Nolan Allan, Evan Allan, Emma Andrews and great grandmother of River, Katie, Wyatt, Hunter, Gracyn, Laney, Molly, Quinton, Maggie, Matilda, Lochlyn, Hudson, Murdoch and Macallan. Dear sister of the late Johnny (Betty, still living) Barclay, the late Cathy Capener and the late George Barclay. Sister-in-law of Anne Allan and David Allan. Also survived by many nieces and nephews and a host of family in Scotland and Ontario, Canada. Due to COVID-19 restrictions, there will be no public services. Memorial contributions to St. Jude Children's Research Hospital are appreciated. Share your memories at www.sullivanfuneraldirectors.com.

Evelyn Allan, age 93, passed away on September 27, 2020 at her home in Royal Oak. She was born on April 11, 1927 in Edinburgh, Scotland to Francis McCartney and Louise Barclay. She met her husband, James, in Scotland while he was serving with... View Obituary & Service Information

The family of Evelyn Allan created this Life Tributes page to make it easy to share your memories.

Send flowers to the Allan family.