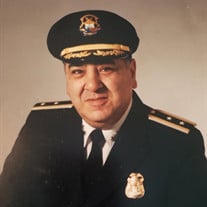 Francis Allen, a CYO football champion and (in his mind at least) sandlot hall of fame third baseman, Korean War Veteran, public servant, father of five men he loved beyond any earthly measure, and hero to his 13 adoring grandchildren and two great-grandchildren, joined his wife of 59 years (the girl next-door and his 8th grade crush) in eternal life on May 25th. Frank bravely served the people of the City of Detroit as a policeman for 41 years, retiring in 1993 as a decorated Deputy Chief. While tough on duty, to his friends and family he had the tenderest and most compassionate heart. His life and his faith taught him that no one was beyond redemption and love didn't need to be rationed because there was always an endless supply left behind to give others. He credited his parents and his church for these values, and those he leaves behind will endeavor to carry them forward. In grateful recognition of the many blessings he found in life, he persevered in his faith and remained devoted to the Blessed Mother always. His material generosity to his family was legendary. Home Depot had nothing on Frank. There was an endless supply of nuts, bolts and assorted odds and ends in the basement and garage, and the price (free) was always right. Birthday money came months before an actual birthday. (Rumor has it that he slipped up once in 1987, forgot an earlier payment, and paid one lucky celebrant twice. Though suspects abound, the guilty party has never confessed and was never publicly identified by his benefactor.) Christmas cash reliably showed up not long after Halloween, and generous random pay-outs were regularly made and gratefully accepted by all. In family parlance, these disbursements came to be known as "dividends from the Bank of Frank". He was in on the joke, and those who made it knew the real "Bank of Frank" traded in love, not cash. Even as he kept a busy family and professional life, he found or was recruited to various efforts in service to his community. He was devoted to his parish family at St. Suzanne church. He found fellowship and enjoyed occasional evenings away from home as an active member of the parish Men's Club. Sunday mornings usually found him at the church rectory drinking coffee and helping to make sure that the weekly offerings were sorted, counted and safely deposited in the parish account. Until his dying day he complained about the bad knees that he confidently attributed to the long-ago Lenten season when he and a friend did self-imposed penance by spending every evening stripping and reupholstering the kneelers throughout the church by hand. For decades he was elected by its members to serve on the board of his beloved credit union, Diversified Members Credit Union. It was a job he took pride in doing because he thoroughly believed in the concept of community-based, member focused banking at the heart of the credit union movement. Though decidedly not a digital native, he recently modeled his ongoing commitment to DMCU by gamely joining the rest of us during the pandemic in adapting to a new normal by learning to attend board meetings via Zoom. He has now started the next leg of his journey. But for those he loved and who loved him in return, he remains fixed in our hearts and in our memories and we rejoice that he is most definitely and finally at rest. From the beginning to the end, love prevailed. Beloved husband of the late Mary Lou for 59 years. Father of Robert (Ann), John (Stephen Orlando), Daniel (Kathleen), David (Colleen), and James. Grandfather of 13. Great-grandfather of 2. A visitation will be held on Wednesday, May 26, from 4:00 until 8:00 pm at Wm. Sullivan and Son Funeral Home, 705 W. 11 Mile Rd. (4 blocks east of Woodward), Royal Oak, 48067. Francis will lie in state on Thursday, May 27, from 9:30 am until time of Funeral Mass at 10:00 am at St. Suzanne Catholic Church, 19321 W. Chicago, Detroit, 48228. Entombment at Holy Sepulchre Cemetery in Southfield. Donations in Francis' memory may be made to the Autism Alliance of Michigan, 30100 Telegraph Rd., Suite 250, Bingham Farms, MI 48025.

Francis Allen, a CYO football champion and (in his mind at least) sandlot hall of fame third baseman, Korean War Veteran, public servant, father of five men he loved beyond any earthly measure, and hero to his 13 adoring grandchildren and two... View Obituary & Service Information

The family of Francis Cyril Allen created this Life Tributes page to make it easy to share your memories.

Francis Allen, a CYO football champion and (in his mind at least)...

Send flowers to the Allen family.