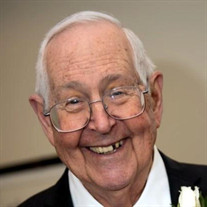 Frank Holmes Atwood passed away peacefully on Saturday, March 05, 2022, at 9:30 pm just a few weeks before his 89th birthday. A memorial service will be held in the Chapel at Allegria Village in Dearborn, Michigan, Monday, March 14, 2022 at 1:30 pm. Frank will be inurned at the Leroy Congregational Cemetery in East Leroy, Michigan, Friday, March 18, 2022 at 1 pm. Frank was born April 18, 1933, to Ephraim Henry Atwood and Edna Seidel Atwood at Ravenswood Hospital in Chicago, Illinois. He attended college for Agriculture from 1951 through 1953. He enlisted in the military February 1954 of which he served 8 years in the Army and Army Reserve as a Specialist Third Class (SP3). During the Korean War he was stationed at the headquarters of the Antiaircraft Artillery & Guided Missile Center in El Paso, Texas and was awarded the Good Conduct Medal and the National Defense Service Medal. Frank then moved to Climax, Michigan to the family's beloved Attewode farm, which was established in the mid-1800s, where he managed 240 acres. In November 1958, he had 100 hogs, 20 milk cows, young cattle stock, and chickens, which grew to a fully functioning dairy farm with most acreage under cultivation. In 1969 he moved to Southfield, Michigan, where he worked for Pittsburgh Paint and Glass. Frank's entrepreneurial spirit led him to open his own business in 1986; Atwood Paints and Wallcovering in Birmingham, Michigan. This endeavor thrived under his ownership for 14 years until Frank's retirement in 1999. When Frank was not diligently working, he pursued his passion and love of fishing, gardening, cards and games with family and friends. He loved to travel and fish in Canada and Alaska, as well as on the many Michigan lakes. Frank is survived by his youngest son and his wife, 3 grandchildren and their wives and 2 great grandchildren. He was predeceased by his 2 older siblings and his eldest son. In lieu of flowers, it is requested donations be made to the Leroy Congregational Church, c/o Rosemary Bernath, 16847 E South Avenue, Fulton, MI 49052 in the name of Frank Atwood.

Frank Holmes Atwood passed away peacefully on Saturday, March 05, 2022, at 9:30 pm just a few weeks before his 89th birthday. A memorial service will be held in the Chapel at Allegria Village in Dearborn, Michigan, Monday, March 14, 2022 at... View Obituary & Service Information

The family of Frank Atwood created this Life Tributes page to make it easy to share your memories.

Send flowers to the Atwood family.