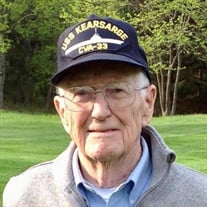 George D. Eckstein, 93, of Washington, MI passed away peacefully at home in the early morning of October 19th, 2021 surrounded by his immediate family. George was born in Mt. Clemens, MI on July 29th, 1928 to Norman D. (Jack) and Helen Eckstein. He grew up in the Village of Warren, then attended the Michigan College of Mining and Technology (Michigan Tech University) where he earned a Bachelors and Masters of Science in Civil Engineering. Upon graduation after a short stay at Albert Kahn Associates in Detroit, he was drafted into the Army to serve in the Korean War. Shortly thereafter he enlisted in the Navy and was accepted into Officers Candidate School. Initially started as an Ensign, he was discharged as a Lieutenant Jr. Grade after serving approximately four years as a Maintenance Officer for fighter squadron VF-112 on the USS Kearsarge, an Essex-class aircraft carrier in the Pacific Fleet. At the conclusion of his service, George joined the Engineering Department of the City of Warren, then moved to the Engineering Dept at the Macomb County Dept. of Public Works. It was during his time at Macomb County that he joined with his close friends and associates, Warren (Andy) Anderson and Bill Westrick to form Anderson, Eckstein, and Westrick (AEW), a Civil Engineering, Land Surveying, and Architecture consulting firm. George married Patricia A. Torrance on October 5th, 1963. They went on to have two children, Kathleen and Michael. They built their home in Washington Township in 1965 where they continued to live until his passing. George was a private pilot and previously owned a Cessna 140, but he spent most of his time tending to their property in Washington. He was most frequently found taking on one project or another on his Ford farm tractor. George was predeceased by his father and mother Norman D. Eckstein and Helen Eckstein (nee Hartsig) and his brother Jack Eckstein. He is survived by his wife Pat Eckstein, children Kathleen Eberle, and Mike (Beth) Eckstein, grandchildren Alison, Zak, Jake, and Josh, sister-in-law June Eckstein, and nieces and nephews Cindy, Mark, and John. A private visitation and funeral service will be held. Interment White Chapel Memorial Cemetery Troy, Michigan. Arrangements by Wm. Sullivan & Son Funeral Home-Utica. Please share a memory at www.sullivanfuneraldirectors.com

The family of George D. Eckstein created this Life Tributes page to make it easy to share your memories.

Send flowers to the Eckstein family.