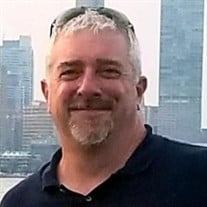 George William Marutz II, a resident of Huntington Woods, passed away on Sunday, September 26th, at the age of 52. A son of George Jr. and Linda (nee Jasper), George was born on July 6, 1969 in St. Joseph, Michigan. He attended Lakeshore High School before earning his bachelor's degree in 1993 from Western Michigan University. George's career spanned over 25 years as an electrical engineer, more than 15 of those at Robert Bosch LLC. George was a chill, laid-back man with a brilliant mind. He loved his career as an electrical engineer and enjoyed the many innovative projects he worked on while at Bosch. Through work and leisure, George traveled to many countries in Europe and Asia in addition to cities all over the U.S. and Canada. His favorite vacation was to Bora Bora and Tahiti. George was famous for removing factory-installed audio equipment from cars and replacing them with his own system. He valued quality over quantity with his equipment, which earned him winning titles in audio competitions. George was an avid cyclist and mountain biker. He explored several state parks in southeast Michigan and belonged to cyclist clubs. George once set a goal of cycling 6,500 miles in one year. He reached that goal with a couple months to spare. George loved his family dearly. He introduced his sons to PC and console games, and together they played Lego Star Wars, Halo, and Minecraft. George will be missed by many family and friends. Loving father of Nathan and Zachary Marutz. Dear brother of Amanda Marutz. Good friend and former spouse of Laura Pierce. Doting owner to dog Max- his faithful and furry companion. A visitation for George will be held on Saturday, October 2, from 1:00 pm until time of service at 3:00 pm at Wm. Sullivan and Son (4 blks E. of Woodward), 705 W. Eleven Mile Rd., Royal Oak, 48067. In lieu of flowers, donations may be made to the LMC Foundation, 2755 E. Napier Ave, Benton Harbor, MI. 49022, in memo: Linda Marutz Scholarship.

George William Marutz II, a resident of Huntington Woods, passed away on Sunday, September 26th, at the age of 52. A son of George Jr. and Linda (nee Jasper), George was born on July 6, 1969 in St. Joseph, Michigan. He attended Lakeshore High... View Obituary & Service Information

The family of George W. Marutz II created this Life Tributes page to make it easy to share your memories.

Send flowers to the Marutz family.