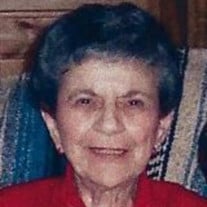 Gloria Frances Von Eberstein, beloved sister, wife, mother, grandmother and great grandmother, died Friday, October 22, 2021, in her home in Royal Oak, Michigan. She was 97 years old. Her brother, Tony was with her at the time of her passing.... View Obituary & Service Information

The family of Gloria F. Von Eberstein created this Life Tributes page to make it easy to share your memories.