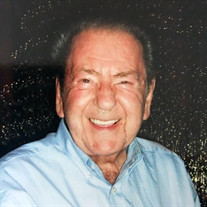 Harold Yates Adams, age 87, passed away Easter morning April 12, 2020 in Royal Oak, Michigan. He was born in Detroit, Michigan on August 17, 1932 to the late Vernon Adams and Maude Jeffrey (Hartley Adams). Harold took great pride in his work as a Pattern Maker with the Chrysler Corporation for 31 years. He was a proud member and former President of the UAW Local 412, where he started one of the first prayer groups for workers dealing with addiction, mental health and wellness. He was a champion for workers rights and anyone who needed him. He has been an active member of Emmanuel Bethel Church of Royal Oak since its groundbreaking. His beautiful voice was a part of their choir for many years and will greatly be missed. He was also a member of Westminster Presbyterian Church of Rogers City while he and his wife lived in Northern Michigan. Harold married the love of his life Barbara Adams (Hernden) on September 26, 1953. They celebrated 53 wonderful years together before she passed away on June 3, 2007. He was a proud father of four boys, Mark (Diane) of Scottsdale, AZ, James (Ann) of Royal Oak, MI, Scott (Robin) of Dansville, MI, and Harold Jr. (Michael - deceased) of Scottsdale, AZ. He was also a proud grandfather of 8, Britt, Ian, Korinne, Sarah, James, Glynis, Lauren and Aidan; and was also adored by his 11 great-grandchildren. He also leaves behind his two half sisters, Sharon Wiley and Karen Adams; and many nieces and nephews that he loved dearly. He is preceded in death by his three brothers, Charles, David and Douglas; his half brother Allan, his stepfather Irving and his stepmother Eudene. Harold adored his family and they adored him even more. He always had time for a good conversation, was a great dance partner and was notorious for starting singalongs. Everywhere he went he would make new friends and he was the life of the party. He leaves behind an amazing landscape of hearts and lives that he has touched, who will forever remember his laugh, the twinkle in his eyes and the song and compassion in his heart. A memorial gathering will take place on Monday, June 14, 2021 starting at 11:00 am until time of service 12:00 pm, at Emmanuel Bethel Church, 4000 Normandy Rd., Royal Oak, MI 48073. In lieu of flowers, memorial contributions can be directed to the following organizations: - Emmanuel Bethel Church - Steeple Fund - 4000 Normandy Rd, Royal Oak, MI, 48073 or https://emmanuelbethel.org - Ted Lindsay Foundation - www.tedlindsay.org - The Trevor Project - www.thetrevorproject.org/

The family of Harold Y. Adams created this Life Tributes page to make it easy to share your memories.

Send flowers to the Adams family.