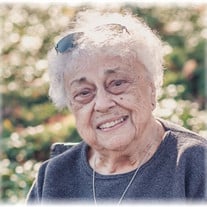 Helen Louise Decker (nee Stock), long-time resident of Sterling Heights, passed away surrounded by loved ones in her home on January 28th, 2022. She was born on December 29th, 1930, and recently celebrated her 91st birthday with her favorite indulgence, Oreo blizzard cake. She was a loving mother to her five rambunctious sons: Stephen (Jodi), Thomas (Pam), Lawrence (Diane), Matthew (Susan), and Michael (Michele), as well as a wonderful grandmother to her sixteen grandchildren and nine great-grandchildren. She met her husband and soulmate, Thomas Decker, in 1953 and after a quick courtship was married on August 7th, 1954. With a passion for books, Helen served as a librarian for the Detroit Public Library in her early adulthood. At age forty, she was accepted into Macomb Community College's Nursing Program and worked as a registered nurse at Holy Cross Hospital from 1972-1985. After retiring from nursing, she transitioned to the family business, Decker Auto Parts, where she had the pleasure of working everyday with her sons and grandchildren until she fully retired at age 87. When she was not working, she could be found antiquing or watching TCM with a piping hot cup of coffee and piece of cornbread on her favorite couch. She also loved traveling with her best friends, some of her favorite spots included Alaska, St. Thomas, and Hawaii (in hopes of finding Magnum, P.I). She also enjoyed visiting family in the upper peninsula and her cottage near Clare, Michigan. She had a deep affection for music and spent her adolescent years attending concerts and meeting musicians. She can be quoted on several occasions saying she was so attracted to her husband due to his close resemblance to her favorite musician, Glenn Miller. Helen was a woman of great faith and devotion always putting God first, family second, and the Detroit Lions third. She possessed the unique ability to befriend any animal, and she is already passing out treats in heaven to all her old and new furry friends (watch out Betty White). She was greeted at Heaven's gates by her parents, George and Evelyn (nee Elegeert) Stock, sister, Lucille Ptach, and her husband, Thomas, just in time for their first Valentine's Day together in 28 years, and to spend eternal rest with our Heavenly Father. **For those that may be unable to attend Helen's funeral mass, the service will be live-streamed at the church, and a link will be posted in the obituary the day of her mass** Helen's family will receive friends for visitation on Tuesday, February 1, 2022 from 2:00 p.m. until 8:00 p.m. with a rosary service at 7:00 p.m. at the Wm. Sullivan & Son Funeral Home, 8459 Hall Road (3 blocks East of Van Dyke), Utica. A funeral mass will be held on Wednesday, February 2, instate beginning at 10:30 a.m. until the time of her mass at 11:00 a.m. at St. Matthias Catholic Church, 19 Mile Road, Sterling Heights. Please share a memory at www.SullivanFuneralDirectors.com

Helen Louise Decker (nee Stock), long-time resident of Sterling Heights, passed away surrounded by loved ones in her home on January 28th, 2022. She was born on December 29th, 1930, and recently celebrated her 91st birthday with her favorite... View Obituary & Service Information

The family of Helen L. Decker created this Life Tributes page to make it easy to share your memories.

Send flowers to the Decker family.