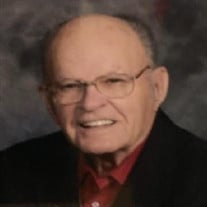 Hubert “Don” Lingerfelt passed away December 19, 2021 He was born February 26,1931 In Highland Park, Michigan. The son of Roy Samual London and Agnes Lucille. His profession was a steel hauler driving a 32 wheel truck and was a proud Teamster. He joined the Military in February 1948 serving with the U.S Air Force during the Berlin Air Lift in 1949. He then served in the Korean war. He was Honorably discharged in 1954 from Moody Air Force Base in Valdosta, Georgia. He was married to Mary Virginia McArthur for 40 fun filled years before her passing on May 11, 2000. Surviving are his children Donald Hubert (Julie) Lingerfelt of Tulsa Ok., Kathleen Ann (Dave) Witmer, of Millersburg Pa., and Kurt Lee (Paula) Lingerfelt. Nine grandchildren: Donald Earl (Sherry) Lingerfelt, Anthony Brandon Lingerfelt, Charles Ian (Amanda) Lingerfelt, Jacob Riley Lingerfelt, Kate Virginia Lingerfelt, and Rachel Ann Lingerfelt, Kevin James Crall, Victoria Anne Balsius, and William Benjamin Crall. Four great grandchildren: Alex, Christopher, Rosemary, and Sophia Crall. Also surviving are three great great grandchildren: Stella Marie VanTassel, Michelle Rose and Sylas James Crall. His only surviving sibling is his brother Robert Lee ( Linda) Lingerfelt, of St Clair, Michigan Two brothers, Roy Lynn (Erdean) Lingerfelt preceded him in 1999 and Willis Dalfred Lingerfelt in 2015. Sister, Della Pauline (Edward) Kortas passed away in 2020. They were a very tight and happy family. Also surviving is his long term companion, Christine Henderson, of Marysville, Michigan. He had many interests when he retired from trucking including traveling, theater, dancing, Dinner club, and gardening and working in the backyard of his house, playing cards with friends and family. He was involved in many clubs including the Carpathia Club of Sterling Heights, Royal Order of Elks #34 of Royal Oak, VFW post#1407 of Madison Heights, MI., Life member of the Yankee Air Force Museum, 319th Fighter Inceptor Squadron, Grissom Air force base and Museum, American Legion Post #8 in Port Huron, MI. He was also very involved in the Royal Oak Masonic Lodge #464. He went into all the different groups in the Masons. He was a 32nd degree Mason and was Past Master of the Shrine, Knights Templar, Scottish Rite, York rite, and the Royal Arch. He did many great programs including raising funds for the needy, battered women and children and providing Teddy bears to police departments for the police to give to children who were scared from traumatic events. He enjoyed driving the transportation bus with his brother Dalfred from Detroit to the Shriner’s Hospital-Orthopedic Care in Chicago, IL., so children could get the help and care that they needed. He enjoyed photography as a hobby and was also a professional wedding photographer. He was always taking pictures and enjoyed sharing those photos with people he knew. He almost always had a camera in his hand. Visitation will take place on Monday, December 27, from 2 - 8 p.m. (Masonic Service planned for 7:00 p.m.) at Wm. Sullivan and Son Funeral Home, 705 W. 11 Mile Rd. (4 blocks east of Woodward), Royal Oak. Additional visitation will take place on Tuesday, December 28, from 10 a.m. until time of funeral service, 11:30 a.m., at the funeral home. Burial with military honors to follow at Oakview Cemetery in Royal Oak. Share a memory at www.SullivanFuneralDirectors.com.

Hubert &#8220;Don&#8221; Lingerfelt passed away December 19, 2021 He was born February 26,1931 In Highland Park, Michigan. The son of Roy Samual London and Agnes Lucille. His profession was a steel hauler driving a 32 wheel truck and was... View Obituary & Service Information

The family of Hubert "Don" Lingerfelt created this Life Tributes page to make it easy to share your memories.

Send flowers to the Lingerfelt family.