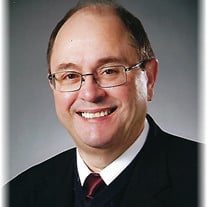 John "Jack" Dalzotto was called home to our heavenly Father on April 10, 2021. Jack was married to his High School Sweetheart Karen, for 48 years. He and Karen spent many years traveling the world (Italy being his favorite) to visiting his family up north. Karen was always ready to share in their adventures. Growing up, Jack was one of four siblings. He was the oldest and had three younger sisters; Patty, Janey and Karen. Being the oldest and the only boy, he was very protective of his sisters. He had a great upbringing and family life in his earlier years. He was always his Mothers "Golden Child" but his sisters knew why and went along with it. He deserved the title. His faith walk began in his early years. He was an altar boy then received his Diploma in Pastoral Ministry from Sacred Heart Seminary as a Spiritual Advisor. He counseled those who were lost and hurting and also to couples engaged to be married. He continued his walk with God throughout his whole life. A true example of a Godly man. Jack and Karen raised their two boys, Jack Jr. and Jeffrey, to be strong young men and Jack was always there for them. Jack lived in St. Clair Shores, Warren and the past two years Shelby Township. Jack had a love for life. Loved to laugh and tell a good joke. He was always there for anyone in need. No one was a stranger to him. His caring personality drew many to him and helped them emotionally always and financially when he could. Jack retired from Lamina as an IT Manager in 2015. After a short time of retirement, he opened a consulting company and was caregiver to Karen for many years. The Detroit Tigers were a favorite for both him and Karen. Their mutual love for baseball brought them to many games or just sitting around the tv and watching them. Karen and Jack also loved the Dream Cruise and car shows. Jack is survived by Karen, his beloved wife of 48 years. He is survived by his sons, John "Jack" Jr. (Heidi) and Jeffrey Dalzotto. He is a treasured Grandfather of Kori, Nick, Bella and Sophia. Brother to Pat (Ken) Konarzewski, Jane (Al) Kemp and Karen (Larry) Adair. Brother-in-Law to Janet (Ray) Ciechorski and David (Ann) Klebba. And friend to all! **Due to COVID-19, and in accordance with CDC recommendations and the Governor's Executive Orders, please be advised that the funeral home is limited to 25 people in the visitation/service room at any given time. Please be mindful of your time at the funeral home as there may be others that may be waiting to pay their respects. Also, masks are required to enter the building. Jack's family will receive friends for visitation on Tuesday, April 13, 2021 at the Wm. Sullivan and Son Funeral Home, 8459 Hall Road (3 blocks East of Van Dyke), Utica from 3:00 p.m. until 8:00 p.m. with a rosary service at 7:00 p.m. A funeral mass will be held on Wednesday, April 14, 2021 at St. Therese of Lisieux Catholic Church, 48115 Schoenherr Road, Shelby Township, at 10:00 a.m. Entombment at Sacred Heart Cemetery, Roseville. Memorials are appreciated to: the Capuchin Soup Kitchen, 1820 Mt. Elliott Street, Detroit, MI, 48207 or at www.cskdetroit.org; Archdiocese of Detroit, 12 State Street, Detroit, MI 48226-1823 or at www.aod.org; or St. Therese of Lisieux Catholic Church, 48115 Schoenherr Rd, Shelby Township, MI 48315 or at www.stthereseparish.ws. Please share a memory at www.SullivanFuneralDirectors.com.

John "Jack" Dalzotto was called home to our heavenly Father on April 10, 2021. Jack was married to his High School Sweetheart Karen, for 48 years. He and Karen spent many years traveling the world (Italy being his favorite) to visiting his... View Obituary & Service Information

The family of Jack Dalzotto created this Life Tributes page to make it easy to share your memories.

John &quot;Jack&quot; Dalzotto was called home to our heavenly Father on...

Send flowers to the Dalzotto family.