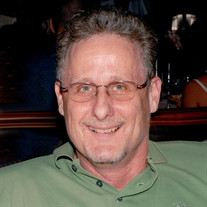 James R. King, age 69, passed away on September 24, 2020 after a hard fought battle with Melanoma. He was born on September 12, 1951 in Highland Park, MI to Ralph and Jean King. He grew up playing sports - baseball, football, swimming, and track and field. He also pursued flying; but that was once, off the garage roof, with wooden wings. After that, he stuck with organized sports. On January 6, 1973, Jim and Pat were married in Warren. The couple were longtime residents of Pleasant Ridge where they raised three boys, multiple dogs, cats, guinea pigs, birds, a few frogs, and a sea of fish amidst the jungle of houseplants Jim carefully cultivated. For 41 years, Jim worked as a cable splicer and stubborn old goat for AT&T, before retiring in 2010. He took great pride in his work, his skill, and getting on management's last nerve. Jim had a lifelong love of learning. He was a self-taught computer programmer, photographer, beer brewer, and historian of the American Civil War, Vietnam War, and both World Wars. In retirement, Jim took up woodworking and spending long lazy afternoons reading on the front porch and talking with the neighbors. When the snow started to fall, and it was too cold to sit on the front porch, Jim went about shoveling all the neighbors' sidewalks just to show them he still had it. Beloved husband of Patricia. Loving father of Steve (Paul), Matt (Marissa) and Brad. Proud grandfather of Joanna and Scarlett. Dear brother of Barb King. The family will receive friends Thursday, 2-7 pm at Wm. Sullivan and Son Funeral Home, 705 W. 11 Mile Rd. (4 blks E. of Woodward), Royal Oak. In lieu of flowers, memorial contributions to Melanoma Research Foundation, 1420 K Street NW, 7th Floor, Washington, DC 20005 or Michigan Animal Rescue League, 1624 N. Perry St., Pontiac 48340 are appreciated. Share your memories at www.sullivanfuneraldirectors.com .

James R. King, age 69, passed away on September 24, 2020 after a hard fought battle with Melanoma. He was born on September 12, 1951 in Highland Park, MI to Ralph and Jean King. He grew up playing sports - baseball, football, swimming, and track... View Obituary & Service Information

The family of James King created this Life Tributes page to make it easy to share your memories.

Send flowers to the King family.