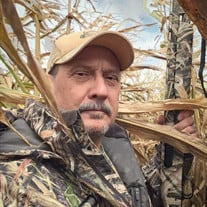 James F. Nielsen, 65, of St. Clair Shores, MI passed away peacefully on April 12, 2021. Jim was born in Detroit on December 13, 1955 to the late Franklin and Margaret Nielsen (nee Adams). Jim had a great childhood growing up in East Detroit, attending St. Angela's and continuing his Catholic education and graduating from Notre Dame High School in Harper Woods. Being raised with a total of 5 siblings, the importance of family was automatic to Jim. Without question, Jim was happiest when he was with the people he loved. He was a family man. A self-described sports fanatic, Jim had talent for rattling off just about any NFL statistics known to man. He loved the outdoors, especially bird hunting and he was becoming quite the Gunsmoke enthusiast. His love of the outdoors made it easy for Jim to adore his dogs. Sadie, his German Wirehair Pointer and Tess his English Setter, stole his heart. He loved his dogs. Jim was employed at Lakeshore Community Schools in St. Clair Shores as a custodian. To say Jim was proud of his son, Matthew, is a huge understatement. He was Matt's biggest fan, and Jim was so proud of the man his son had become. He would always tell people how proud he was of Matt's service in the Marines, but most importantly how kind, genuine, and driven his son was in life. They were father and son, but Jim always referred to Matt as his "Pal," and that will never change. Jim is the longtime loving companion of, Lisa Francis. Beloved father of Matthew. Cherished brother of Debbie (Bill) Peppo, Denise (Bill) Kuhr, Kevin (Theresa) Nielsen, Shari (Larry) Marlinga. Dearest Grandpa Jim of Joey and Natalie. Jim is also survived by many other family, friends, and colleagues. A memorial service to honor Jim's life will be held at a later date. Donations in Jim's name are suggested to Ducks Unlimited. Visit www.ducks.org to make a donation honoring Jim. Your donation will help us continue to conserve and protect threatened waterfowl habitat throughout North America. The family is being served by Wm. Sullivan and Son Funeral Directors- Utica. Please share a memory at www.SullivanFuneralDirectors.com

James F. Nielsen, 65, of St. Clair Shores, MI passed away peacefully on April 12, 2021. Jim was born in Detroit on December 13, 1955 to the late Franklin and Margaret Nielsen (nee Adams). Jim had a great childhood growing up in East Detroit,... View Obituary & Service Information

The family of James F. Nielsen created this Life Tributes page to make it easy to share your memories.

Send flowers to the Nielsen family.