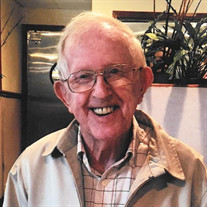 Jim Therkalsen's Legacy James Therkalsen (Sept. 1, 1926 - Sept. 20, 2021 - Age 95), a lifelong resident of Royal Oak, recently passed away. Jim was happily married for 63 years to the love of his life, Shirley Dube (Therkalsen), who passed away in 2012. They raised four children (all surviving). The kids will tell you their father never had an unkind word to say to anyone-family or strangers. He was kind, generous, tolerant and had an easy charm and smile that put everyone at ease. Jim was born in Detroit, Michigan to Ove and Karen Therkalsen. His mother died when he was seven and he was raised by his father and Aunt Camilla Christensen. He was grateful to grow up with his brother Bill and cousins Judy Moehle and Nancy Witczak. Jim graduated from Royal Oak Dondero High School, where he enjoyed running track. After high school he worked as a butcher at a Kroger market, where he met his lifetime sweetheart Shirley. Jim displayed extraordinary courage at an early age, joining the US Navy at age 18 during World War II (1944-1946). He was stationed in the Pacific theater on the USN Persepcen SK3c class and received an honorable discharge. He was very proud of serving in the military, attending the Memorial Day parade every year. Jim later joined J.C. Nielsen, a family construction company. He became an expert cost estimator and ended up running the company for about 50 years. The company primarily built churches, schools and retirement facilities. Jim worked long hours to support his family, including sending his children to Catholic school. Despite the long hours, he felt very fortunate to be working with his brother Bill Therkalsen and Chuck Moehle (husband of his beloved cousin Judy Moehle). He was a neat, well-dressed man who never worn jeans and wore a suit to the construction office. His tool shed, basement and garage were organized with military precision. You never had to search as every possible tool was easily found when needed. Jim enjoyed the simple pleasures in life-a good game of golf, a walk with his sweetheart, spending time with family and friends and smoking an occasional cigar. And he was a heck of a good dancer. In retirement Jim and Shirley spent the winter months in their mobile home in Florida. He also worked for R.O.S.E.S as a handyman for low-income seniors. He enjoyed going to the Royal Oak Farmer's market every Saturday with Shirley and they went on many golf outings together. And in his later years he never missed his "Nutter Butter" cookies at breakfast and had a weak spot for scratch off lotto tickets. Most of all he loved small talk and joking with pretty much anybody within speaking range. He left smiles on peoples' faces wherever he went. Jim and Shirley's most enduring legacy are their children and many grandchildren and great grand kids. But Jim's special gift was to show that kindness, honesty, humility, humor and tolerance are the hallmarks of a genuinely good person. He was a member of what has been called "The Greatest Generation" and he fully lived up to that billing. Jim is survived by his four children: Michael Therkalsen (Denise), Gregg Therkalsen (Jamie), Stephen Therkalsen (Carla), and Mary Mickus (Tom), nine grandchildren: James Therkalsen (Elizabeth), Scott Therkalsen (Melinda), Kelly Therkalsen, Jennifer Townsend (Zach), Ryan Therkalsen, Kyle Therkalsen, Eric Therkalsen, Michael Therkalsen, and Zach Mickus, five great granddaughters: Lillie, Camilla, Avery, Morgan and Waverly, his brother Bill Therkalsen and cousin Judy Moehle. A Memorial Mass will be held on Friday, October 15, 2021, at 10:00 am at Christ Our Light Catholic Church at 3077 Glouchester in Troy, Michigan 48084 (Phone 248-649-5510). Church luncheon will follow. The internment of Jim's ashes will be done at a future time at Oakview Cemetery in Royal Oak, Michigan. In lieu of flowers, donations may be made to the American Heart Association at www.heart.org.

The family of James Therkalsen created this Life Tributes page to make it easy to share your memories.

Send flowers to the Therkalsen family.