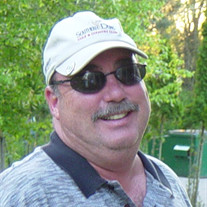 Age 67, passed away Friday, December 10, 2021 at home in Sterling Heights, Michigan. Jeff was born on March 22, 1954 to Richard and Elizibeth Cazier (Kalusha). He was one of 5 children, having two sisters older than him, Patti and Jeanne, and two sisters younger than him, Cathy and Chris. He grew up with an adventurous spirit, following his fathers footsteps into competitive diving, performing family clown diving shows with his parents and siblings, and even surpassing his own fathers diving record in high school. He excelled at snow and water skiing, golfing, and boating and he traveled all across the country to do all of these. He attended college for several years before settling into a career as a salesman and project manager for industrial automation systems in the automotive industry. He earned a fantastic reputation for getting things done and made many, many friends. He married his wife, Judy, on August 8, 1985, and enjoyed 35 years of loving marriage before she passed away on June 2, 2021. They raised two children, Jason and Richard, both of which are now fine young men. Jeff is survived by his sons: Jason and his wife Erin and Richard Cazier, his four sisters: Jeanne (Matt Baroch) Rosario, Cathy (Edward) Thompson, Patti Stepp, and Chris Spurgeon, and his two grandchildren: Charlotte and Evan Cazier. Jeff was preceded in death by his parents and his wife. A visitation is planned for Saturday, december 18th, 2021, to allow for final goodbyes, after which he will be cremated and buried with his wife at a later date. A celebration of life will take place at a later date. In lieu of flowers and other gifts, please make a donation to the American Heart Association in the memory of Jeff and Judy cazier.

Age 67, passed away Friday, December 10, 2021 at home in Sterling Heights, Michigan. Jeff was born on March 22, 1954 to Richard and Elizibeth Cazier (Kalusha). He was one of 5 children, having two sisters older than him, Patti and Jeanne, and... View Obituary & Service Information

The family of Jeffery Cazier created this Life Tributes page to make it easy to share your memories.

Send flowers to the Cazier family.