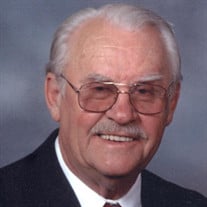 Jerome Owen "Jerry" Schroeder, a resident of Shelby Township, passed away on March 19, 2021 at the age of 92. Jerry Schroeder was born on a farm in Roseville, Michigan. His mother, Rose Klebba Schroeder, contracted tuberculosis and died when Jack, Jerry, Lorraine, and Thomas were young. The family, impacted by the Great Depression, eventually moved to a residence on Jefferson Avenue in downtown Detroit. Jerry's Dad, John Frank Schroeder, married Mary Anna Kaspryzk and gave Jerry three more siblings. They are Shirley, Esther, and Leroy. Jerry graduated eighth grade from SS. Peter and Paul Jesuit School. He attended Saint Leo High School through the completion of tenth grade. The onset of World War II brought his formal education to a halt, but not his life-long love of broadening his knowledge and learning new things. He went on to work in the automotive field to replace men who had been called to war. He took on duties at a Sinclair service station and eventually worked for The Hudson Motor Car Company. Jerry became a master mechanic, and that skill was key to his placement when called to serve in the military. He served in Europe as part of the 2nd Armored Division. He supervised vehicle maintenance. It was the famed tank unit named "Hell on Wheels". He reached the rank of Sargent First Class. Jerry went on to become a life member of Disco Michigan VFW post 4659. Upon return he married childhood love, Dolores (Dee) Sliman. Together for fifty-five years, they raised six children: Karen (Scott) Holland of Shelby Township, Cindy (Clay) Cprek of Troy, John (Diane) Schroeder of Macomb, Fred (Cathy) Schroeder of Shelby Township, Patricia Schroeder of Shelby Township, Jerome "Jay" (Lynda) Schroeder of Romeo. They gave him sixteen grandchildren: William (Kelly) Holland, Peter (Wendy) Holland, Rose (Daniel) Barney, Katherine (Bryan) Martin, Julie (Daniel) Connochie, Stephen (Allison) Cprek, Jerome (Kyla) Schroeder, Andrew Schroeder, Christopher Schroeder, Joseph Schroeder, Mathew Woznicki, Daniel Schroeder, Lydia Schroeder, Emily Schroeder, Mary (Harrison) Lonczynski, Erik Schroeder and four great-grandchildren: Lillian Schroeder, Violet Schroeder, Audrey Holland, Liam Cprek. Family is where they found their greatest joy and deepest satisfaction. Jerry participated in countless aspects of his children's early years. He enthusiastically supported their involvement in Scouting, youth sports, church ministries and more. He taught them practical skills like car maintenance, home improvement, and care of the yard. He was always happy to be with his children and grandchildren for important events and moments in their life. He warmly welcomed every person who married into the family. The family knew he loved them and was proud of them. They came to refer to themselves as "Jerry's Army". As a couple, Jerry and Dolores shared their passionate love of each other, life and service to God with family, friends and the greater community. General Motors saw something special in Jerry and brought him in as a fleet mechanic. It proved a good move as he was hard working and innovative. One of his creative sparks created a change in procedures that led to his promotion from mechanic to Supervisor. Jerry spent many years overseeing the fleet and getting to know the engineers at Fisher Body in Warren, MI. Jerry lived a life full of truly amazing moments. There was nothing around his home, or his children's homes that he could not fix, restore, or remodel. He served in a pit crew at the Indianapolis 500. General Motors assigned him the task of restoring the engine and transmission on a 1914 Buick that was donated to The Henry Ford Museum. When in Detroit, Country-Western musician Webb Pierce, would have Jerry tune up his legendary vehicle. That automobile is now on display in Nashville at the Country Music Hall of Fame. Upon retirement he mastered the art of stained and leaded glass work. Most of his projects grace his home and those of his children. Jerry, an avid and accomplished golfer enjoyed the thrill of achieving a Hole in One twice. He was hosting regular monthly poker games up until the COVID lockdown of 2020. Jerry's benevolent works are too numerous to list. Saint Kieran Church in Shelby Township had been his spiritual home and family for 52 years. He served there as an Usher, Fourth Degree Knight of Columbus, active member of countless committees and projects, MCREST volunteer, and supporter of youth programs. He along with wife Dee supported projects and initiatives that helped shape a number of the vibrant ministries in place today. Jerry was preceded in death by his wife, Dolores; father, John; step-mother, Mary; mother, Rose; and siblings John "Jack," Lorraine (Raymond), and Thomas. In all of life Jerry exhibited and extraordinary level of humility, humor, faith, hope and love. His hand was always open and extended to offer welcome or help. He will be missed by many. ­In lieu of flowers, donations in Jerry's memory may be made to: Capuchin Retreat 62460 Mt. Vernon Washington, MI 48094 (248) 651-4826 St. Kieran Stained Glass Window Project Saint Kieran Catholic Church 53600 Mound Road Shelby Township, MI 48316 (586) 781-4901 A visitation for Jerry will take place on Friday, March 26, from 2:00 to 9:00 pm with a 7:00 pm Knights of Columbus memorial service at Sullivan Funeral Home, 8459 Hall Rd., Utica, 48317. Jerry will lie in state on Saturday, March 27, from 9:00 am until time of Funeral Mass at 10:00 am at St. Kieran, 53600 Mound Rd, Shelby Charter Twp, 48316. Interment at Resurrection Cemetery in Clinton Towsnship.

Jerome Owen "Jerry" Schroeder, a resident of Shelby Township, passed away on March 19, 2021 at the age of 92. Jerry Schroeder was born on a farm in Roseville, Michigan. His mother, Rose Klebba Schroeder, contracted tuberculosis and died... View Obituary & Service Information

The family of Jerome O. Schroeder created this Life Tributes page to make it easy to share your memories.

Send flowers to the Schroeder family.