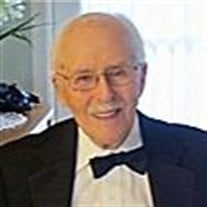 Not sure what to send?

John Arnold Kaichen John Kaichen led a remarkable life. His first career was in the newspaper field, where his inquiring mind led him to fully embrace the roles of reporter and City Editor of the Daily Tribune in Royal Oak, Michigan. In mid-life he attended law school, became a prosecutor and then an attorney in private practice with Judge William Beasley, William McMachan, Philip Neuman and John O'Neil among others. A graduate of Cranbrook School, Kenyon College and the Detroit College of Law, John embraced community involvement through charitable work that reflected his passions. He was a long-time trustee of Credit Union One, the Cranbrook Horizons-Upward Bound Program and one of the founders of a scholarship award for ethics in journalism, John equally enjoyed his Rotary Club membership and singing with gusto in diverse area choirs. Born in Cincinnati on March 11, 1925, to Howard and Margaret Heavenrich Kaichen, John lived in Highland Park, Michigan as a child. In his youth he moved to Huntington Woods where his parents built a home with a victory garden. As an adult he resided in Bloomfield Hills, Michigan. In later life moved to Margate, New Jersey and then Hobe Sound, Florida. John Kaichen was predeceased by his parents, his sister Susan Kaichen Duddy, his wife Elizabeth Kaichen, his grandson Mason Litak and his lifelong best friend, Jerry Schroder. Survived by his wife, Joan Davis Johnson Kaichen, and children Lisa Kaichen (Leon Broussard); David Kaichen (Vicki Chiaverini); Carolyn (Robert) Litak and stepchildren Kimberly (David) Carmichael and Kenneth Johnson (Maria Robinson). He was beloved by his grandchildren Angela Kaichen, Erika Kaichen Brady, Marissa Kaichen Litak and great-grandson, Gavin Chaisson. Papa John's memory will also be cherished by Blake, Cameron, Nikky, Kristin, Amelia, and Elsie. His in-laws Bonnie and Jerry McMullen and Richard and Marsha Davis, niece Christy Spangler and nephews Russell McMullen and Blair and Steven Duddy and a host of cousins will miss John's incredible Joie de Vivre. RIP Dear One. You inspired us all with your wit, enthusiasm, intellect and love. Tribute gifts will be gratefully received by Horizons-Upward Bound, a program that helps students with limited opportunities to achieve their dreams for academic success. Donations may be sent to Horizons-Upward Bound, Attn: Shenise Foote, P.O. Box 801, Bloomfield Hills, Michigan 48303 or on-line at www.bit.ly/JohnKaichenHUB Visitation and a memorial service will be held at 10:00 am at Wm. Sullivan & Son Funeral Home in Royal Oak, Michigan on June 15, 2022. The Memorial will be streamed. You can access the livestream at the following: https://www.sullivanfuneraldirectors.com/obituaries/John-Kaichen/#!/PhotosVideos (select "Media" tab if viewing from a mobile device) a few minutes prior to the service. Please contact Lisa Kaichen for more information at 985-789-0268 or [email protected]

John Arnold Kaichen John Kaichen led a remarkable life. His first career was in the newspaper field, where his inquiring mind led him to fully embrace the roles of reporter and City Editor of the Daily Tribune in Royal Oak, Michigan. In mid-life... View Obituary & Service Information

The family of John A. Kaichen created this Life Tributes page to make it easy to share your memories.