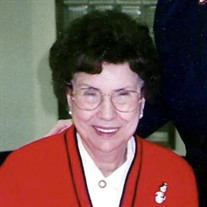 Kathleen Marie (Gohl) Gilchrist Kathleen Gilchrist went home to her Lord and Savior on December 25, 2021, at age 98. She was born in Royal Oak in 1923 to John and Dorothy Duke. Her family, which included four brothers, lived in Birmingham and Kathleen graduated from Birmingham High School in 1942. For a brief time she worked at General Motors, then in October 1944 she joined the Naval Air Corps as a WAVE during WWII, where she served until April 1946. She returned to work at General Motors where she met her first husband, Emerald Gohl. Together Kathleen and Emerald had two children, Sandra K. and Robert E. Gohl. They lived in Waterford and were active in the Royal Oak Salvation Army Church. Kathleen was widowed in 1983, and in 1986 she married LaMar Gilchrist, who predeceased her in 2000. In her adult years, Kathleen worked at Hudson's Department Store, a children's clothing store and Burke Lumber Co. She eventually retired from Waterford Schools where she was a teacher's aide. For many years she met for breakfast several days a week with her "Big Boy" gang. She remained a faithful soldier of the Royal Oak Salvation Army, where she especially enjoyed her Sunday School Class. She was a loving mother and devoted prayer warrior for her grandchildren and great grandchildren. Kathleen was predeceased by her beloved granddaughter, Julie Marie Rowland. She is survived by her daughter, Major Sandra (Ed) Rowland; son, Robert (Mary) Gohl; two grandsons, Michael (Amber) Rowland and Mark Gohl; two great grandchildren, Natalie and Nathan Rowland; and step-daughter, Janet McNamara. Visitation will take place at Wm. Sullivan and Son Funeral Home, 705 W. 11 Mile Rd. (4 blks E of Woodward), Royal Oak on Sunday, January 2 from 2-8 pm. Funeral Monday, in-state 10 am until time of service 11 am at Royal Oak Salvation Army, 3015 N. Main St., Royal Oak. The family requests the wearing of masks during visitation at both locations. A private interment will take place at Oakview Cemetery. Donations may be made to Royal Oak Salvation Army. Share your memories at www.sullivanfuneraldirectors.com.

Kathleen Marie (Gohl) Gilchrist Kathleen Gilchrist went home to her Lord and Savior on December 25, 2021, at age 98. She was born in Royal Oak in 1923 to John and Dorothy Duke. Her family, which included four brothers, lived in Birmingham and... View Obituary & Service Information

The family of Kathleen M. Gilchrist created this Life Tributes page to make it easy to share your memories.

Send flowers to the Gilchrist family.