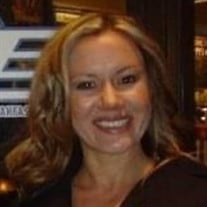 Our Kelly girl was a vibrant woman who graduated from Utica High School Class of 1992. She accomplished Track Records, she was a cheerleader and attended Central Michigan University. Kelly was a go-getter, she was a loving, and kind person... View Obituary & Service Information

The family of Kelly Ann Zoppi created this Life Tributes page to make it easy to share your memories.

Our Kelly girl was a vibrant woman who graduated from Utica High...

Send flowers to the Zoppi family.