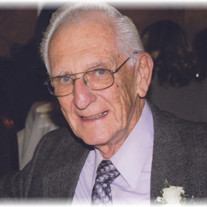 Kenneth Doerflinger, passed away on October 8, 2021 at the age of 92. He was born on August 5, 1929 to Henry and Irma Doerflinger in Detroit, Michigan. Ken was their only child. His parents instilled the importance of Jesus Christ in his life from a young age. They belonged to Mt. Calvary Lutheran Church in Detroit, Michigan, where he was very active in the church. He went to Denby High School in Detroit, Michigan, where he graduated high school in 1947. After high school, he attended Lawrence Technical University. Ken proudly served his country in the United States Army. Even though they had known each other their whole lives, belonging to the same church and high school, Ken started dating the love of his life, Evelyn List in 1952. On November 5, 1955, they married each other in Mt. Calvary Lutheran Church. In 1957, they welcomed their first child into their life, Tom. In 1959, they added a second child to their family, a daughter, Karen. In 1960, they completed their family with the addition of Nancy. Ken was an accountant by trade, and he worked for a few companies over the years. When he began working for TCT Stainless Steel, he truly found the place he was meant to be. He found his work there very satisfying and built close relationships with all that he worked with. Ken was very involved in his grandchildren's lives. He enjoyed attending their sports functions. He was also an avid bowler and was a member of the City Lutheran Bowling League. He was also an avid golfer. He enjoyed them so much he continued both until his final days. Ken was also active in his church, Trinity Lutheran in Utica. He was a proud member of the Golden Circle. With all of his family, there was nothing Ken looked forward to more that the multiple trips each year that were taken to their family cottage in Higgins Lake. With all of his family by his side, and on the lake, Kenneth had his piece of heaven on earth. Ken will be remembered for his strong faith, the love for his family, and his positive outlook. Ken leaves behind his loving children Tom (Nancy), Karen (Ken) Wonsowicz, and Nancy (Joe) Burke; his cherished grandchildren Tom, Matt, Steve, Jake, Tyler, Connor (Stephanie), Shane, Chelsea (Bryan), Devon, and McKenzie; and his dear great-grandchildren Lillyanna, Charley Rose, and Evie. Kenneth is now is Heaven with the love of his life, Evelyn, and his parents. Ken's family will receive friends for visitation at the Wm. Sullivan and Son Funeral Home, 8459 Hall Road (3 blocks East of Van Dyke), Utica on Friday, October 15, 2021 from 2:00 p.m. until 8:00 p.m. A funeral service will be on Saturday, October 16, at Trinity Lutheran Church, 45160 Van Dyke, Utica with a visitation from 12:30 a.m. until the time of service at 1pm. Memorial contributions can be made to the Trinity Lutheran Foundation, or donors choice of charity. Please share a memory at www.SullivanFuneralDirectors.com.

Kenneth Doerflinger, passed away on October 8, 2021 at the age of 92. He was born on August 5, 1929 to Henry and Irma Doerflinger in Detroit, Michigan. Ken was their only child. His parents instilled the importance of Jesus Christ in his life... View Obituary & Service Information

The family of Ken Doerflinger created this Life Tributes page to make it easy to share your memories.

Send flowers to the Doerflinger family.