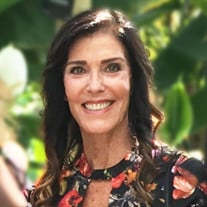 Kimberly Ann Aiello, a resident of Troy, Michigan, passed away on Sept. 16, 2021, at 66-years-old. Her final days were spent as she lived: passionately and adventurously. Kim was born in Chicago, Illinois on May 31, 1955, but her formative years were spent in Orlando, Florida. She told stories of running barefoot through the woods, snatching ripe fruit off of orange trees and pulling pranks with her siblings and neighborhood friends. Kim graduated from Lyman High School in 1973. She later moved to Georgia to work as a flight attendant with Eastern Airlines. Those years, spent dancing nights away in Atlanta discos and traveling the world, instilled in her a fierce independence and love of flight that would remain throughout her life. She moved to Detroit in the '80s to start a family. To her daughters, Kim was the consummate mother. Her seemingly boundless energy for late night studying, making lunches, carpooling and sewing ballet costumes was surpassed only by her dedication to her daughters' dreams. After her youngest left home, she donned her wings once again in 2008. She would continue her work as a stewardess, most recently with Delta's Endeavor Airlines, for the remainder of her life. Tenaciously active, Kim wouldn't let a day go by without breaking a sweat. She loved gardening, baking and laughing with friends over a glass (or two) of wine. She spent her time making beautiful things for friends she adored and exploring the astonishing beauty of nature. Most of all, Kim treasured her role as a cheerleader, confidante and friend to her daughters. Kim is survived by her two daughters, Alexandra (Anthony Ceretti) Aiello and Chloe Aiello; her siblings, Lisa Goodrich and Jimmy Clinton; her adoptive father, Harry Clinton; her former spouse, Jerry Aiello; and her cherished cat, Rosie. She was preceded in death by her mother, Sally Ann Clinton. A funeral mass will be held at National Shrine of the Little Flower Basilica on Friday, Sept. 24. Visitation will begin at 11:30 a.m. with a Mass to follow at 12 p.m. For those unable to attend the funeral, it will be livestreamed at https://shrinechurch.com/live-streamed-mass. Arrangements are under direction of Wm. Sullivan and Sons Funeral Directors. In lieu of flowers, please send donations to the United States Fund for UNICEF.

Kimberly Ann Aiello, a resident of Troy, Michigan, passed away on Sept. 16, 2021, at 66-years-old. Her final days were spent as she lived: passionately and adventurously. Kim was born in Chicago, Illinois on May 31, 1955, but her formative... View Obituary & Service Information

The family of Kimberly A. Aiello created this Life Tributes page to make it easy to share your memories.

Kimberly Ann Aiello, a resident of Troy, Michigan, passed away...

Send flowers to the Aiello family.