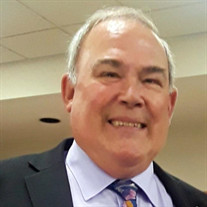 Larry Luxa, age 69, passed away on September 25, 2021 at his home. He was born on May 27, 1952 in Detroit to Louis and Waverleen Luxa. Larry earned his Bachelor of Science degree in Animal Husbandry at Michigan State University and after graduation joined the Peace Corps, serving in the Philippines for five years. He began working in the Philippines at Dairy Training Research Institute where he met the love of his life, Rosie Sevilla. The couple were married in the Philippines on June 17, 1979 and began their married life together. In 1980 they moved to Michigan, living in Royal Oak and ultimately settling in Berkley. Larry worked in the restaurant industry, starting as a cook and working his way into management. He was employed at Jojo's Restaurant in Southfield, several locations of Ryan Roadhouse as a manager, Macy's restaurant, Valvoline Oil, PNC Bank as a teller and later in his life worked at Panera Bread as a manager at different locations. Never one to sit idle, Larry enjoyed fishing, birding, camping and hiking. Beloved husband of Rosie Luxa. Dear brother of Jim (Jan) Luxa, Bob (Adele) Luxa and the late Vicki (Mike, still living) Megroet. Also survived by many nieces, nephews, great nieces and great nephews. Visitation Tuesday 2-8 pm with Scriptural Rosary 6 pm at Wm. Sullivan and Son Funeral Home, 705 W. 11 Mile Rd. (4 blks E. of Woodward), Royal Oak. Funeral Wednesday, in-state 9:30 am until time of Mass 10 am at National Shrine of the Little Flower Basilica, Royal Oak. The Mass will be available via [email protected] The livestream will begin a few minutes prior to 10 am on Wednesday. Memorial contributions to American Cancer Society are appreciated. Share your memories at www.sullivanfuneraldirectors.com.

Larry Luxa, age 69, passed away on September 25, 2021 at his home. He was born on May 27, 1952 in Detroit to Louis and Waverleen Luxa. Larry earned his Bachelor of Science degree in Animal Husbandry at Michigan State University and after graduation... View Obituary & Service Information

The family of Larry D. Luxa created this Life Tributes page to make it easy to share your memories.

Send flowers to the Luxa family.