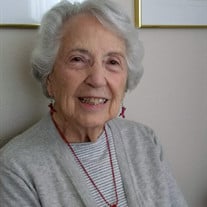 Lillian Margaret Mueller neé Christy passed away peacefully on July 1, 2021. She was born on December 23, 1929 in Sagola, Michigan, daughter of the late Earl and Victoria (St. Onge) Christy. On July 24, 1948 Lillian was united in marriage with Charles Edward Mueller at St. Ambrose Church in Ironwood, Michigan. Lillian was preceded in death by her husband Charles, Her parents, her four sisters, Joyce (Eldred) Keast, Luella (Matt) Nissila, Muriel (Kenneth) Hoglund, Frances (Alfred) Fournier, and three brothers, Joseph (Joan) Christy, James (Carol) Christy, and Peter (Kitty) Christy. She is survived by four children, Charles David Mueller (Michele), Leslie Ann Diviney (Tim), Laura Jean Spicka (James) and Mark Edward Mueller (Christine), seven grandchildren and seven great-grandchildren. Lillian was raised in the western UP of Michigan and attended high school at St. Ambrose. She learned to play the clarinet, earning her music lessons by cleaning the music room for the teacher. She and three other students formed a band called the "Hot Spotters" and provided entertainment for many school dances. In 1946 Lillian started working part-time in a neighborhood ice cream store in Ironwood and met a young man named Chuck. Chuck started stopping by for ice cream or a malt almost every day, and eventually invited Lillian to a dance. (She had to get permission from her parents to date him.) They married in 1948, and were blessed with a union lasting an amazing 72 years, until Chuck's passing in 2020. In 1953 Lillian and Chuck left the UP and moved to Royal Oak where Chuck started work in the school district. In the 60's, during summer vacation from school, they managed the Portage Lake Bible Camp near Onekema, Michigan. After many years of raising the kids, being mother, room mother and den mother, involved in P.T.A. and numerous church activities, Lillian managed the medical office of a surgeon at Wm. Beaumont Hospital in Royal Oak. In the mid seventies Lillian received an acrylic paint set as a gift. That lead to her studying with several art teachers in the area. In 1978 she was invited to join the South Oakland Art Association and her paintings were juried into art shows. She received several awards for her work in acrylic and oil painting. In 1984 Lillian and Chuck moved to Canadian Lakes and finished building the retirement home which they had designed. It was built amid the rolling hills and tall trees in central Michigan. They loved the area and enjoyed spending time slowly cruising Lake of the Clouds in their pontoon boat, watching the loons, ducks, and deer. She and Chuck made many friends in the Canadian Lakes area. Chuck began wood turning and carving while Lillian was involved in the Canadian Lakes Art Club, eventually becoming its president, and expanded her painting abilities to include watercolors. She enjoyed the distinction of having a one-woman exhibit at a gallery in Mt. Pleasant, and sold many of her paintings at shows and art fairs. Lillian gifted several pieces of her art works to her children over the years - a beautiful legacy that we will enjoy forever. In 2002 Lillian and Chuck moved to a seniors apartment in Waterford, MI. True to form, they made many friends and enjoyed many of the activities and outings. Feeling the need to be nearer to the kids, Lillian and Chuck returned to Royal Oak in 2014. They relished being closer to family and getting to know the great grandchildren as they came along. "Painting has made me more aware of the beauty in a cloudy sky, an old weathered barn, and a pot of geraniums on a sunny ledge." - Lillian Christy Mueller There will be no formal services. Please consider LowellArts, 223 West Main Street, Lowell MI 49331 (www.lowellartsmi.org/donate ) if you wish to make a gift in Lillian's memory.

Lillian Margaret Mueller neé Christy passed away peacefully on July 1, 2021. She was born on December 23, 1929 in Sagola, Michigan, daughter of the late Earl and Victoria (St. Onge) Christy. On July 24, 1948 Lillian was united in marriage with... View Obituary & Service Information

The family of Lillian M. Mueller created this Life Tributes page to make it easy to share your memories.

Send flowers to the Mueller family.