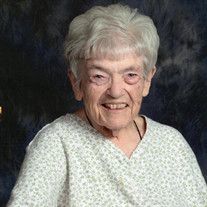 Margaret E. Basey was born March 11, 1929. She was the oldest of 5 Basey children, and the daughter of Bill and Clodah Basey. Her siblings were Ilene, Bill, Jean and Tom. She was educated through the schools in Royal Oak, Michigan, graduating... View Obituary & Service Information

The family of Margaret Edna Jackson created this Life Tributes page to make it easy to share your memories.

Send flowers to the Jackson family.