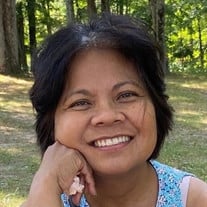 Maria Cristina, "Cristy," Nordstrom, age 60, passed away on April 27, 2022. She was born on December 7, 1961, in San Pablo City, Philippines to Santiago Sevilla and Juliana Lunez Sevilla. Loving mother of Jonathan. Wife of Larry Nordstrom. Dear sister of Rosie (the late Larry) Luxa, Tessie (the late Ike) Lontoc, Danilo Sevilla, Gloria Sevilla, Manuel Sevilla, and Mylene Fiestada. Cristy earned her Bachelor's Degree in Economics at the University of the Philippines - Los Banos. She then proceeded to work for the Department of Agriculture of the Philippines-Agrarian Reform Division, as the head of the finance department. In 1992, she moved to Michigan, USA, after meeting Larry Nordstrom and marrying him in 1994. She worked various secretarial jobs until she went back to school at Oakland Community College to pursue nursing, in which she earned her Associate's Degree in Nursing in 1999. In 2002, she gave birth to her first and only son, Jonathan. From 1999 to 2014, she worked as a clinical nurse at Beaumont in Royal Oak. From 2014 until 2020, she worked as a clinical nurse at the Beaumont Berkley Outpatient Dialysis Center. Cristy enjoyed going out on drives, traveling, seeing nature, talking and going out with her siblings and friends, watching movies, drawing, and spending lots of quality time with her son Jonathan. Visitation Monday 5-8PM and Tuesday 1-8PM with Scripture Service 7PM at Wm Sullivan and Son Funeral Home, 705 W. 11 Mile Rd., (4 blks E. of Woodward), Royal Oak. Funeral Wednesday, in state 10AM until time of funeral Mass 10:30AM at Guardian Angels Catholic Church, 581 14 Mile Rd., Clawson. Memorial contributions to Multiple Myeloma Research Foundation are appreciated. Share your memories at www.sullivanfuneraldirectors.com .

The family of Maria Cristina Nordstrom created this Life Tributes page to make it easy to share your memories.

Send flowers to the Nordstrom family.