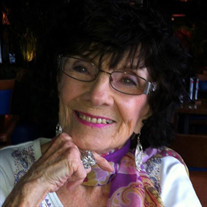 Marie Ailene Evans, a resident of Royal Oak, passed away on May 4, 2022 at the age of 101. A daughter of Bill and Irene Johnson, she was born on February 13, 1921 in Cyrene, Missouri and grew up in Birmingham, Michigan. After graduating from cosmetology school, Marie styled hair and gave manicures to loved ones in a Missouri funeral home. When she returned to Michigan, Marie joined Chrysler as a parts distributor in their tank arsenal and was as a manicurist in Royal Oak. Marie then worked for Burrows Adding Machine before her longest-standing career as a purchaser and seller for Scanlon Piano during the Motown era. Marie met her husband, Donald Evans, at Chrysler and were married in 1949. Marie loved being on her grandparents' farm in Missouri, where her fondest memory was canning peaches with her grandmother. Marie's mother called her "Rea," but Marie's hobby earned her the nickname "Peaches." In her youth, Marie also graded eggs. When her favorite songs came on the radio, Marie couldn't resist singing along. She even sang at Cotter's Tavern in Royal Oak. In the 60s, Marie enjoyed cruising on her family's boat (the "Hey Marie") until they built their pool. Marie thrived on entertaining her children, grandchildren, and their friends at the pool in her backyard- everyone was welcomed. She decorated her home impeccably and was always fashionably dressed (usually in pink or white). An avid Tigers fan, Marie rarely missed watching a game. Her favorite places to travel were Hawaii, where she escorted tour groups, Acapulco, Hilton Head, and on the many cruises she took, Marie could usually be found on the dance floor. She soaked up the sun at her second home in Pompano Beach, Florida. Marie's greatest love was her children and grandchildren. Marie's personality was beautiful and sassy right until the end. When asked her age, Marie would say "Age is a number and mine's unlisted." Beloved wife of the late Donald. Loving mother of the late Richard Calihan, Michael Calihan, and Debbie Tewilliager, and mother-in-law of Diane Bruglio and Pam Calihan. Cherished Nana of Michael Calihan Jr., the late Jeff Calihan, Scott Calihan, Giulia Bruglio, and Joey Bruglio. Dear sister of the late Cecil Hays. Best friend and cousin of Joan Silver. Marie will be loved and missed by many family and friends. ~"We love you more..." A visitation for Marie will take place on Thursday, May 19, from 2:00 to 8:00 pm at Wm. Sullivan and Son Funeral Directors, 705 W. Eleven Mile Rd., (4 blks E. of Woodward), Royal Oak, 48067. Family and friends will a gather on Friday, May 20, from 11:00 am until time of service at 12:00 pm at the funeral home. Interment to follow at Oakview Cemetery in Royal Oak. Donations in Marie's memory may be made to St. Jude Children's Research Hospital, 501 St. Jude Place, Memphis, TN 38105.

Marie Ailene Evans, a resident of Royal Oak, passed away on May 4, 2022 at the age of 101. A daughter of Bill and Irene Johnson, she was born on February 13, 1921 in Cyrene, Missouri and grew up in Birmingham, Michigan. After graduating from... View Obituary & Service Information

The family of Marie Evans created this Life Tributes page to make it easy to share your memories.

Marie Ailene Evans, a resident of Royal Oak, passed away on May...

Send flowers to the Evans family.