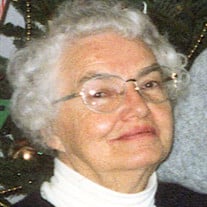 We celebrate the life of Marion Zaske, a blessed and happy, fulfilled life. Marion Esther Zaske nee Schneider was born July 7, 1927 to Edward William Schneider and Christine Marie Schneider nee Vierk on their farm on 17 Mile Rd near Van Dyke, Sterling Twp, Michigan. Marion had three siblings, Gertrude (deceased), Ralph (deceased) and Adele Pickett. Marion began her education at a one-room schoolhouse where Mrs. Gundy taught all eight grades. At age twelve, Edward and Christine moved to Pleasant Ridge, Michigan. She attended St Paul's Lutheran Church in Royal Oak where she first met Arthur Paul Gustav Zaske. They would not begin dating until high school in Ferndale at age 16. They would marry six years later, January 2, 1947. Arthur was in the Navy attending college at Case Institute in Cleveland. After Arthur graduated, he entered the Naval Reserve, and he and Marion moved into the upper floor apartment in Arthur's parents' home on Breckenridge in Ferndale where their first child, Arthur Edward was born. In 1951, Marion and Arthur moved to Royal Oak, Michigan where Sandra Elaine and Stephen Karl was born. In 1955, they moved to Mt Vernon, Michigan into a hundred-year-old farmhouse with no heat, electricity, or indoor plumbing. Arthur, and his father, also Arthur, rebuilt the house while the family lived there. Marion had enough of the farm after two years, during which time her mother Christine passed away. With the inheritance, they moved to Utica (1957) where they would stay for nearly forty years. Daughters Diane and Leanne would be born in Utica. After an eighteen-year hiatus, Marion would rejoin Trinity Lutheran Church where she was christened and had gone to church Sunday school for the first twelve years of her life. After a five-year stint in Gladwin, Marion and Arthur would move back to Utica. Arthur died of lung cancer in 2003. Marion would stay in the house they had built on Russell Street until 2017. After one year at an assisted living facility, Marion purchased a home in Holly, Michigan where she stayed until she passed quietly in her bed. October 17, 2021, at age 94. Marion leaves behind: Sister, Adele Pickett (age 100), Children, Arthur, Sandra Stull, Stephen (deceased), Diane Fitch, and Leanne Clifton, fifteen grandchildren and twenty-three great-grandchildren. A memorial service will be held at Trinity Lutheran Church in Utica, Michigan for the family. Marion requested that donations be made in lieu of flowers, Her preferred charity is the Food Bank of Eastern Michigan. Donations can be arranged at or by mail to The Food Bank of Eastern Michigan, 2300 Lapeer Rd, Flint, Michigan 48503.

The family of Marion E. Zaske created this Life Tributes page to make it easy to share your memories.

We celebrate the life of Marion Zaske, a blessed and happy, fulfilled...

Send flowers to the Zaske family.