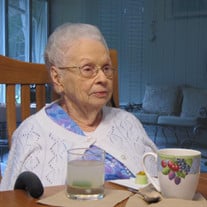 Mary Ruth Galle, 99, passed away peacefully at her home in Warren, MI on February 11, 2022. Mary was born on December 3, 1922, in Gilmer, TX. The youngest of eight children, Mary Ruth was given the nickname "Baby Ruth" by her father because of her sweet nature. After graduating high school-the only one of her siblings to do so-Mary fell in love and married Ed "Lefty" Galle the following year. Lefty affectionately shorted her nickname and, for the rest of his life, referred to her simply as "Baby." They had a wonderful life together. Mary was by Lefty's side for sixty-four years, whether watching him play baseball, cheering for the Detroit Tigers or New York Yankees, caring for their son and grandchildren, or traveling. Her career included positions in retail, accounting and cake decorating for Detroit's famous Sanders confectionary. During World War II, Mary served as a gauge inspector in an aircraft factory. Later, she and Lefty owned a drive-in restaurant in Freeport, TX. When Mary and Lefty retired n 1983 they began a series of cross-country adventures with their dog, a dachshund, who barked incessantly at windshield wipers. Mary was an avid reader all her life and when macular degeneration took her sight she gratefully accepted audio books from the Macomb County Library of the Blind. Although her hearing also declined, her mind and body remained strong. Until the last few months of her life Mary used Alexa to play her favorite music, kept her cell phone handy around her neck, and rode her exercise bike faithfully six days a week. She valued her independence and, with support from her son, Michael, happily remained in her home until her passing. A red-headed Irish lassie, Mary was quick to close her eyes, wrinkle her nose and laugh out light. She was immensely proud when her granddaughter, Allyson, was born with beautiful read hair like own. Her happiest moments right up until her death were with friends and family, sharing pizza and margaritas; always on the rocks, with salt and in a proper margarita glass. She was so sweet, easy going, a great listener, and a close friend said recently "the kindest woman I ever met." Mary was predeceased by her husband, Lefty, her granddaughter Toby, and her siblings Ollie, Eva, Billie, Myrtle and JIm. Two additional siblings died at birth. She is survived by her son Michael and daughter-law- Carol, granddaughter Allyson and grandson in-law Neal Moawed, grandson Tynan, niece Judith and nephew in-law Bob, dear friends Deb Rollins, Sherry and John de'Nooijer, Lin Klaasen, and her beloved grand dog Snickers. Services will be private, and Mary will be buried beside her beloved Lefty at Great Lakes National Cemetery. In lieu of flowers, the family suggests donations to the Macomb County Library for the Blind (via Clinton-Macomb Public Library) or the Michigan Humane Society.

Mary Ruth Galle, 99, passed away peacefully at her home in Warren, MI on February 11, 2022. Mary was born on December 3, 1922, in Gilmer, TX. The youngest of eight children, Mary Ruth was given the nickname "Baby Ruth" by her father because... View Obituary & Service Information

The family of Mary Ruth Galle created this Life Tributes page to make it easy to share your memories.

Mary Ruth Galle, 99, passed away peacefully at her home in Warren,...