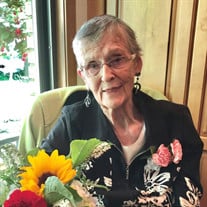 Seitz, Maureen A. April 9,1931 - December 25, 2021 Loving wife of the late Jerry for 67 years. Survived by her dear children Suzanne (the late Noel), James (Diane), the late Paul, and daughter in law Carol Seitz Keller (Chris). Loving grandchildren Paul (Lauren), Jacob, Francis (Nelli), Rebecca (Jason Wetzel), Matthew, Michael, Allison, Julie Maul (Brian), and the late Kate. As well as her 9 adorable great grandchildren. Beloved daughter of the late James and Veronica Crimmins, sister of the late Rosemary Abel (Don) and the late Thomas Crimmins (Louise). Also survived by many nieces, nephews and friends. Maureen grew up in Detroit, graduating from Visitation High School and Providence Nursing School. She had a very generous spirit and gave of her time… be it to her family, her profession as a nurse or volunteering. Her passion after retirement was playing bridge, both in the Detroit area and in Florida. Don't be sad that she is not with us, be happy that you were one of the people in this world to know her. We, the lucky few! A Memorial Service will take place at a later date. Memorial Tributes to Mother Theresa Missionaries of Charity, 1917 Cabot St., Detroit, MI 48209 or Greater Michigan Chapter of Alzheimer's Assoc., 25200 Telegraph Rd., Suite 100, Southfield, MI 48033.

The family of Maureen Ann Seitz created this Life Tributes page to make it easy to share your memories.

Send flowers to the Seitz family.